A first novel which is deservedly on more than one bestseller list included the New York Times!

Set in 1962-64 Jackson, Mississippi, the novel tells the story of three unforgettable women — two African American maids, Aibeleen and Minnie, and ‘Skeeter’, the white woman who compiled their stories into a book. Their stories spoke of the great love they had for the white children under their care as well as the segregation and extreme racial discrimination they experienced. Writing down their experiences was dangerous for all of them as the early sixties were a time of deep-seated prejudices and social inequality. The danger was palpable and made the book read almost like a suspense novel at times.

Today we have become complacent with the race issue and seldom now think of the quite recent history when things were abominable and horrendous for blacks. Kathryn Stockett’s novel was initially rejected by close to 50 literary agents. I think I speak for many when I say that we are truly grateful that she persevered.

It made me laugh aloud and also cry many tears. What more can you ask of a novel? 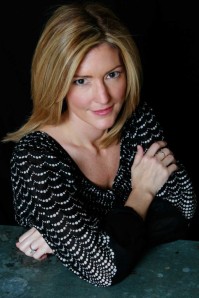 The author, Kathryn Stockett is not who I would expect to have written such a novel. She is a petite, white woman in her early forties who wrote with such understanding and compassion that it is almost eerie. She had a black maid in her childhood and that woman inspired “The help” — though Stockett has said the book is fiction and not autobiographical.  Stockett is at work on her second novel, a story set in Mississippi during the Depression. Meanwhile, she’s keeping an eye on casting and location work for the film version of “The Help” which is being produced by Dreamworks. The movie will star actress Emma Stone and Viola Davis, who was nominated for an Academy Award in 2009 for “Doubt” and the location will be Greenwood, Mississippi, a town that has a lot of similar aspects of Jackson in the 1960s.

I have found a great site that lists memorable quotes from the novel.
Oprah’s O magazine has created a reading group guide for the novel.
A wonderful audio interview can be found on the Barnes & Noble website. What did we do before the internet? What a joy to read a wonderful novel and then be able to hear the author speak about it?
An interview with Kathryn Stockett by BookRabbit.com which features audio clips.
A one hour video interview with Katie Couric.

3 Responses to “The help” by Kathryn Stockett – Book Review