We’ve all had the dream where we wake up startled by the sensation of falling.  Very unsettling… much like this debut novel by Emma Kavanagh.  The book portrays many different forms of falling – both metaphorically and literally – and how these effect the characters, usually to their detriment. Then of course we have the ever-falling snow… 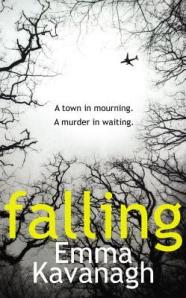 First off, we have an airplane crash in the Black Mountains surrounding the town of Talgarth.  With only thirteen of the seventy-four passengers and crew surviving the ‘fall’ from the sky, this is a tragedy that affects the entire area.  Cecelia, an airline hostess, is one of the survivors.  The irony is she feels she is less deserving than any of the others because she has just deserted her husband and toddler son, Ben.  Thirty-year-old Cecelia’s marriage wasn’t a happy one. It came about as a result of an unplanned pregnancy.  Even before her marriage she was emotionally damaged and consumed with guilt over a previous abortion.  Now it seems that events beyond her control have returned her to her family.  Now she is racked with survivor’s guilt on top of everything else…  Her only solace at this time is her newfound friendship with an elderly surviving passenger, Maisie.

Jim is a retired police superintendent.  The light of his life is his twenty-six year old daughter, Libby who has just joined the Welsh police.  When Libby’s body is found on a riverbank, his life crumbles around him and he falls into despair.  His wife Esther, and son Ethan, cannot offer him comfort, though he tries to ease his wife’s grief by being stalwart while in her presence.  Ethan has always felt envious of his sister – because she was the apple of her father’s eye AND because she was accepted into the police force while Ethan was declined.  These feelings make him feel guilty in the aftermath of her murder.

Next we have Tom, the policeman who is on Libby’s murder inquiry – and husband of Cecilia.  A copper from a family of coppers. A decent and capable man who, like his wife, came from a broken home and does not wish to inflict that trauma on his baby son.  Ben and he share a deep bond – probably in part because Cecelia never seemed to have the mother-son connection that one would expect.  He is in love, but not with his wife.  Nothing will ever come of it because he is so very decent.

Then we meet the Blakes.  The father, Oliver, was the airline pilot who perished in the crash.  His surviving family, wife, daughter Freya and son Richard.  They are all devastated by his loss, yet Freya – in fact all of them – know him to be less than the perfect husband and father.  He had ‘fallen’ from grace many years ago…  When a reporter intimates the suspicions as to the cause of the crash, Freya, forced by circumstances to delve into her father’s murky past, makes some uncomfortable discoveries.

How the lives of these diverse characters intersect is masterfully plotted and written with empathy and a deep understanding of human nature.  The enormity of how quickly life can change, how our decisions impact others, how disappointments can cause our lives to become bitter and sour our lives and the lives of those we love.  Perhaps the fact that the author is a former police psychologist explains how she recognizes the myriad shades of grey that dwell between good and evil.

I love a character driven novel and the outstanding character development in “Falling” elevated it beyond the standard police procedural mystery.  The Welsh setting, in and around Swansea made for an interesting change.  I liked the police officers and hope that they will return in a subsequent novel.

The only thing that I disliked about the novel is the author’s over-dependence on adjectives and her obsession with the slight of stature.  She uses stick thin, heroin thin, concentration camp thin, bone thin, tremulously thin….. you get my drift.  I found this distracted me from the narrative.  Also distracting was the inconsistent time period.  At times early spring was mentioned, at others it seemed to be close to Christmas (as mentioned in the blurb by the author’s literary agency)

In conclusion, the pros far outweigh the cons in my estimation.  I will gladly read another novel by Emma Kavanagh, and I will recommend it to others.

Thanks to Random HouseUK/Cornerstone via NetGalley for my digital copy.

Emma Kavanagh was born in Wales in 1978 and currently lives in South Wales with her husband and their one year old son. She trained as a psychologist and after leaving university, started her own business as a psychology consultant, specialising in human performance in extreme situations. For seven years she provided training and consultation for police forces and NATO and military personnel throughout the UK and Europe.