“A matter of mercy” by Lynne Hugo – Book Review 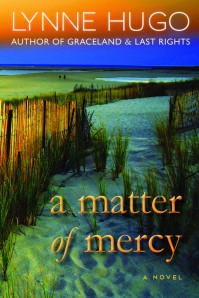 Abraham Lincoln once said “I have always found that mercy bears richer fruits than strict justice.”   In Lynne Hugo’s latest novel “A matter of mercy” we find that to be true.

This is the story of two women and one terrible mistake that irrevocably changed both their lives.  Caroline had a beer too many… and when she argued with her husband she got behind the wheel of her car.  When a moments inattention resulted in her hitting the open door of a parked car she killed a four-year-old boy and injured his mother.   Caroline has been in prison for her crime, but the guilt she carries with her every waking moment is worse than any prison sentence.    The boy’s mother, Terry, is also in a prison of sorts.  One of her own making.  After her son’s death she separated from her husband and lives a life empty of love.  Her darling ‘baby’ was everything to her.  She doted on him – understandable – because he was born physically deformed.

Caroline has been away from her home in the beautiful Cape Cod area for many years.  When she returns home, it is to nurse her terminally ill mother.   Her homecoming has other consequences though when she encounters an old school friend, Ridley Neal, an aquaculturist and oyster-man.  During a storm she helps him secure his aquaculture equipment against the heavy weather.  With her mother in hospital overnight, she takes him back to her mother’s house where they share a one-night stand of two lonely people meeting each others needs.   Caroline (CiCi) has something else in common with Rid… they have both been in prison.  Rid’s sentence was served for youthful drug activity.   Now he works the grant his oysterman father bequeathed him.  Rid loves the life.  He loves the Cape, and his native Wellfleet Harbor.   It is back-breakingly hard, lonely, and sometimes thankless work, but he wouldn’t change it for anything.

Shortly after he and Cici have their one night together Rid and two other aquaculturists find they have become the victims of a lawsuit.  One of the wealthy Wellfleet seasonal residents claims that their equipment and trucks mar his view of the Harbor.  Sounds unbelievable – but this part of the novel is based on fact – there was just such a lawsuit on the Cape in 1996.   With his life’s work and way of life on the line, Rid does not call Cici again.

Meanwhile, while visiting the library, Cici meets up with the mother of the little boy she killed.  Terry works in the library and does not at first recognize Cici.   Caroline befriends Terry – ostensibly to find out how she is… how she’s coping…   She masquerades as a journalist, so she will have an excuse to use the library extensively and get to know Terry.  When, after several weeks, Terry realizes Caroline’s identity, she is shocked and appalled.  She somehow thinks Caroline is out to hurt her again.  She enlists her (somewhat nefarious) cousin to keep an eye on things…

Caroline makes peace with her Mum just in time before she passes away.  She also tells her Mum what she has suspected for a few weeks.  At the age of forty-two – she is pregnant for the first time.   This news delighted her mother who was happy that Cici will not be ‘alone‘.  When, while grieving for her Mum, Caroline finds that Rid had attended her Mum’s memorial service, she decides it is time to confront him and tell him of her pregnancy.   With all the turmoil in his life, Rid does not acknowledge Cici’s plight, rather he takes flight.

Alone, pregnant, and still grieving, Cici is now plagued with a stalker.  Someone who leaves disturbing messages, who walks around her house at night…  After repeated calls to the police, Cici finds that they do not really take her seriously. 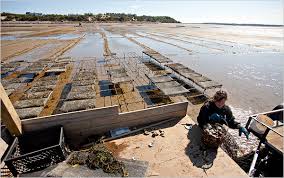 Rid’s life is a mess.   He is desperately trying to hang on to his grant and the time-honoured way of making a living from the sea.  The legal bills are piling up and he feels he has nothing to offer anyone.   But when Cici turns up one night at his house after a particularly frightening ordeal with her stalker, he has no choice but to offer her sanctuary.

This was a love story, but more.   With believable, honest and engaging characters, a realistic and well-rendered setting, the book spoke to a way of life and a way of living more than to any romance.  There were no descriptions of physical longing, or any of the other traditional plot devices found in romantic fiction.   There was however, many, many pages of descriptions of aquaculture.  Well-researched and written in an interesting way, this did not in any way detract from the novel.  It added to it.  Making the characters more real and more empathetic.

You can listen to an interview with the author Lynne Hugo where she discusses writing “A matter of mercy“.

Thanks again to NetGalley for providing me with a free ebook copy of “A matter of mercy” and for introducing me to Lynne Hugo – another author I will read again. 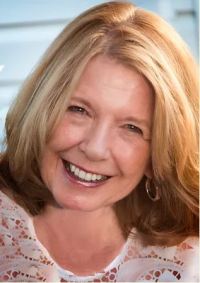 Lynne Hugo is a National Endowment for the Arts Fellowship recipient who has also received grants from the Ohio Arts Council and the Kentucky Foundation for Women. Her memoir, Where The Trail Grows Faint, won the Riverteeth Literary Nonfiction Book Prize and her novel, A Matter of Mercy, received the 2015 Independent Publishers Silver Medal for Best North-East Fiction. She has published eight novels, one of which became a Lifetime Original Movie of the Month. Through the Ohio Arts Council’s renowned Arts in Education program, Lynne has taught creative writing to hundreds of schoolchildren.

Born and educated in New England, Lynne and her husband live in Ohio with a yellow Lab feared by squirrels in a three state area. Scout excels at barking and playing tennis ball shortstop.