Posted on November 26, 2014 by Fictionophile

Set in Ottawa, Canada’s capital city during the week leading up to Christmas, “Cold mourning” was a perfect novel to read this time of year. 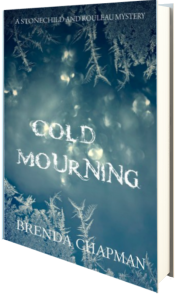 The prologue opens in 1995 in northern Canada where two young First Nations girls have accepted a lift from a stranger.  An action which brings about tragic and traumatic consequences for them both.
Skip ahead to chapter one and Kala Stonechild has just accepted a position on a special task force of the Ottawa police.  Kala’s reasons for relocating to Ottawa are threefold.  She wants to escape a troubling relationship at home, she wants to try city policing, and she desperately wants to find her childhood friend.  It is apparent to the reader that Kala is one of the two girls mentioned in the prologue.   Her name is apt.  Stonechild, a loner,  reveals little of herself.

The unit she is working for is headed by Jacques Rouleau.  A fair man, likeable and plagued with torment in both his private and professional life.  The others on her squad are wary of Kala at first but seem to develop a healthy respect for her as time goes by.

The first day on the job they are assigned a case of a missing Ottawa business man.  Their goal is to find him and have him home in time for Christmas.   Things are never as simple as they are at first glance and the squad are foiled at every turn.  When the businessman’s body is found in the trunk of his car where he has frozen to death – they have a plethora of suspects.  A highly dysfunctional family, some murky business deals and even murkier business partners.

The mystery was very well written with just the right amount of vivid descriptions and several plausible red herrings.   There were a lot of characters in the novel but the characters were so well drawn that the reader didn’t become confused for a second.  The protagonists were engaging and likeable although tragic relationships abounded.

One grievance I had with the book was the poor editing.  There were several typos and grammar errors that were jarring and interrupted the flow of the otherwise faultless narrative.

“Cold mourning“, the first in the Stonechild and Rouleau mystery series, is the first novel to employ a female First Nations sleuth in Canadian fiction!

My ‘in person’ bookclub Whodunit rated the novel out of a possible 10 points.   Fourteen members voted with the average score being 7.5 out of 10 with two votes of a perfect ten among them.

Brenda Chapman’s writing style reminded me a lot of that of one of my favorite Canadian mystery authors, the late L.R.Wright.

Brenda Chapman‘s “Butterfly Kills“, the second novel in the series, will be released on January 10, 2015.  It is definitely on my ‘to read’ list.