“In a vertigo of silence” by Miriam Polli – Book Review

Posted on February 19, 2015 by Fictionophile 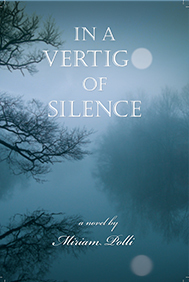 Just like a person’s memories are ‘snatches of time’ not in chronological order, so too is “In a vertigo of silence”.  Written as the collective memory of a family, the novel moves back and forth in time to reveal snatches of the lives of three different generations of a Polish immigrant family.

The writing style could be confusing and distracting, but it is not.  This is due to the fully rounded characterizations and the skillful writing.  With loss and female tenacity as recurring themes throughout, the characters become so well known to the reader that they will remain in the memory as friends.

The family is a matriarchy with Marishka at its head.  A strong and eminently likeable woman, she came to the United States via Ellis Island with her husband, Antoni.  They settled in Pennsylvania where he found work in a coal mine.  Tragically, like so many other miners in the early 1920s, he perished in the mine.  This when Marishka was only days away from giving birth to her third daughter…  Marishka’s tenacity is evident in how she went on to become a talented seamstress, laundress and sometimes house cleaner to make ends meet.

Over time, we meet Marishka’s three daughters.  Paulina, the eldest, is an artist and very close to her mother.  Anna, the beautiful middle child, is a mentally fragile women who drinks to excess.  Eva, the youngest, makes a ‘sound’ marriage and has one son.

We then come to meet Emily, Anna’s daughter.  Emily is bullied at school partly because she comes from a fatherless family. She faced betrayal by her best friend, Wanda.  In her adolescent years she developed an eating disorder.  Her grandmother fears for Emily living with her disturbed mother, so she moves in with them to take over Emily’s care and welfare.  Emily and her grandmother are soul mates.  Things go well until Marishka becomes ill, and Anna is institutionalized. At that time both Marishka and Emily go to live with  the dutiful Eva.

The strange thing is, although the bond between grandmother and granddaughter is very close, Emily grows up believing that she only has one aunt…  This family secret and the reason it came about affects the entire family.

We follow Emily’s life as she goes off to college and becomes an adult.   Then,  after a family tragedy, the family secret is revealed…

I mused about the title.  Perhaps the silence is the ‘not knowing’ of the family secret.  Perhaps the vertigo is the dizzying maelstrom of emotion one feels when something shocking or life-changing is revealed…

I wondered at the many mentions of the moon.  I had to look them up as I had never heard of some of them.  The beaver moon, the hunter moon, the sap moon, the hunger moon, the buck moon, the planting moon.   Then of course the ‘O’ in vertigo of the title on the cover is the moon…  Does the author use this device to put forth the adage that the family members, although separated, are all under one moon, so therefore united?  Or, did she have something profound and entirely different in mind?

One of the great things about being a NetGalley member is that the membership affords you the opportunity to read titles that you might not have discovered otherwise.  I am very thankful that I got to read Miriam Polli’s debut novel “In a vertigo of silence”.

Miriam Polli has written an empathetic and captivating family saga that many will enjoy.  Highly recommended literary fiction!