Looking for a tall, good-looking, police detective with a strict moral code? 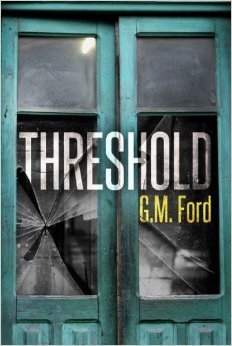 He can be found in G.M. Ford’s “Threshold“.  His name is Mickey Dolan and he is at a crossroads in his personal life.  Just back to work following a ‘personal’ break, he is still reeling from the knowledge that his wife has left him for another woman!  His co-workers are merciless in their demeaning banter and seem to relish his discomfort.

His first major case after returning to work is a murky one.  The wife of Edwin Royster, a high profile city councilman, has run off with his two young daughters.  The law is on his side as he has sole parental custody.   He is enlisting the police to find them.  Only thing is… the councilman (who has a family court judge in his pocket) is also a pedophile.

Oh.. but now Detective Sergeant Micky Dolan is on the case.  After discovering proof of the councilman’s less than savory reputation, he is loathe to return the girls to him.  What a dilemma!

A woman’s shelter group headed by a mother and daughter team have given refuge to the councilman’s wife and daughters.  With money and power behind their group, they have eluded all attempts to find them until now.  Where do they get they funding?  Well… Grace, the daughter (who just happens to be a striking six-foot tall albino) also seems to have the uncanny power to awaken people who have been in comas.  She uses the proceeds (of  selling this ability to families of coma patients) to give shelter and other help to victims of family abuse.

And – once he meets Grace and her ‘muscle’, ex-con, Gus, Mikey fails to obey orders and goes rogue for the sake of the little girls and their terrified mother.

The story has some really interesting and memorable characters.  I was really fond of Gus, who was a big bear of a man who truly cared for the little girls in his charge.  Also, Grace, who was so unique, was a character I’d like to know better.

The novel read like a particularly action-packed television drama with the good guys and the bad guys clearly defined and law and justice poles apart.  The book did contain some graphic violence, though nothing more than you would see on network television.

I think the novel will appeal to both male and female readers equally, but for different reasons.  A fast-paced character-driven thriller with series potential.

My thanks to NetGalley and publisher Thomas & Mercer  for providing me with a digital copy of the novel in exchange for this review.

G.M. Ford is best know for his mystery novels featuring Seattle private investigator Leo Waterman. The six-book Leo Waterman series was nominated for several awards, including the Shamus, the Anthony, and the Lefty.  Ford lives and works in Seattle, and is married to mystery author Skye Kathleen Moody.