“The devotion of Suspect X” by Keigo Higashino – Book Review 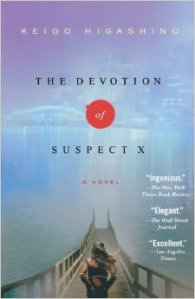 First off, I have to say, this title was not MY choice.  It was the required reading of my “Whodunit” bookclub.  With the narrative set in Japan, it did not appeal to me – not even a little bit.

WOW!  Just goes to show how wrong a person can be.  This was an EXCELLENT murder mystery!  The characters were well drawn and the plot nothing short of ingenious!

Ishigami is a middle-aged loner who wants nothing more of life than to be able to be left alone to do his mathematics research.  A high school mathematics teacher who sacrificed his dream of being a math guru/researcher to look after his aged parents.  His dissatisfaction with his career and lack of personal life has left him extremely despondent.  Then,  just when he intends to end his personal torment, a knock at his door…  it is his beautiful new neighbour and her daughter coming to introduce themselves.

Yasuko – a divorced single mother – and her daughter have moved into Ishigami’s apartment building.  She is starting a new life.  Formerly a club hostess, she now works at a lunch-box restaurant.  She wishes to distance herself and her teenage daughter from her former life and acquaintances.

Her neighbor Ishigami frequents her workplace everyday as it is near the high school where he teaches.  Little does she know that he harbors a secret affection for her as few words are spoken between them.

When Yasuko is approached by her abusive ex-husband, his threatening behavior begets a life-changing act.  Ishigami comes to her aid.

The resulting plan by Ishigami is unlike any other I’ve read in detective fiction.  His intellect has taken every scenario and eventuality into account and the reader is astounded by his intelligence and calculated cunning – not to mention his selfless devotion.  The title of the book was particularly apt in hindsight.

When the police begin to investigate the case they are out of their depth.  It is only with the help of Detective Galileo (who just happens to be a former school-mate of Ishigami’s) that they can begin to fathom the intricacies of Ishigami’s masterful planning.

Kudos go to the very clever Keigo Higashino for creating this multi-layered puzzle.

This novel is highly regarded in the author’s native Japan garnering numerous awards, including the 134th Naoki Prize, which is a highly regarded award. The novel also won the 6th Honkaku Mystery Grand Prize, which is one of the most prestigious awards in the mystery novels category in Japan. 2006 Honkaku Mystery Best 10 and Kono Mystery ga Sugoi! 2006, annual mystery fiction guide books published in Japan, ranked the novel as the number one!

I cannot think of a novel more deserving of acclaim.  Of  over eight thousand ratings by Goodreads readers it scores 3.93  out of 5.  I’m surprised the rating is not higher.

If I had to mention one tiny failing for the English language reader is that the Japanese names can be quite confusing.  For instance the two police officers are named Kishitani and Kusanagi.  So similar for the untrained English ear.  Also, there were a few grammatical errors which I am sure are a result of the translation.

Although the book is part of the series featuring Manabu Yukawa, a brilliant physicist who his policeman friend Kusanagi calls”Detective Galileo“, the novel stands alone without flaw.   It will be raptly enjoyed by anyone who loves murder mysteries and has a love of puzzles. And I do.  Oh, and I did!  Highly recommended! 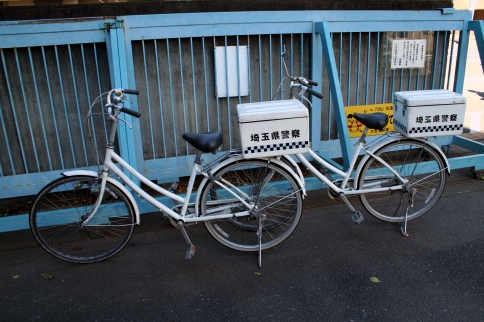 Born in Osaka in 1958 and currently living in Tokyo, Keigo Higashino is one of the most widely

known and bestselling novelists in Japan. He won the Edogawa Rampo Award, which is awarded annually to the unpublished finest mystery work, in 1985 for the novel Hōkago (After School) at age 27. Subsequently, he quit his job as an engineer and started a career as a writer in Tokyo.   In 1999, he won the Mystery Writers of Japan Award for the novel Naoko, which was translated into English by Kerim Yasar and published by Vertical Inc.[1] in 2004. In 2006, he won the 134th Naoki Prize for The Devotion of Suspect X (Yōgisha X no Kenshin).  He writes not only mystery novels but also essays and story books for children.