“The sound of glass” by Karen White – Book Review

This past week I visited the beautiful Lowcountry of South Carolina.   Not in person – but via the pages of Karen White’s wonderful novel “The Sound of Glass“.

A novel that introduced me to characters that I feel have become friends.  When I read the last pages, it was though I was saying goodbye…

I’ve always been the fanciful sort who speculates that old houses have a sentient quality…  In Beaufort, South Carolina we enter such a house.  A house filled with history, not all of it happy.   We begin with Merritt Heyward, a widow who has just inherited the property.  She had never visited it before, but it was where her husband Cal had grown up and it was in his family for generations.   There’s was a short and unhappy marriage.  Cal had been an abusive husband from a long line of violent and abusive men.

The very first day – as Merritt is entering the house – she is joined by some unwelcome company in the form of her stepmother and ten-year-old half-brother.   Merritt has never been a part of their lives and she has never before met her young brother.  She lost her own mother through a tragic accident at a very early age and resented the fact that her beloved father remarried.  And to a woman only five years her senior!   She and Loralee are as different as chalk and cheese.  Merritt is a taciturn and private girl from Maine while Loralee is a talkative, southern beauty from Alabama.  Loralee is also a recent widow as Merritt’s father has recently passed away.  Loralee invites herself and her son to stay with Merritt which annoys and astounds Merritt and spoils her plans of solitary living and grieving…

Merritt becomes aware that Loralee keeps a little journal which she is constantly adding to.  What she doesn’t know is that the journal is filled with life lessons and little ‘pearls’ of wisdom.  Loralee calls it her “Journal of Truths”.  The reader of “The sound of glass” will come to know that this little book is central to the novel and contains wise words that we can all learn from.

Against her better judgement – and despite her reservations – Merritt comes to tolerate, and then enjoy the company of the wise beyond her years Loralee and her son, Owen.    But Loralee has a dark secret which she is not ready to share with her stepdaughter.

The women both meet Merritt’s husband’s younger brother Gibbes.  Loralee befriends Gibbes and tries to encourage Merritt to be aware of him as a potential partner.  Gibbes reminds Merritt of her husband Cal, and she wants no part of Loralee’s plan.

Through flashbacks we come to meet Merritt’s husband’s grandmother Edith.  She too was an abused wife.  She had a secret – and a secret outlet for her pain.  Then there is the mystery surrounding the plane that crashed back in 1955…

This is a novel of female friendship, family ties, family secrets, and second chances.  A novel that will make you smile and make you shed many a tear.  It explores the nature of wife abuse and examines the desperation and sisterhood of the abused.  It scrutinizes the role that fate plays in dysfunctional families, and extolls the wonderful ability some people have to live and die with grace and dignity.

“The sound of glass” is essentially a woman’s novel, but I’m sure that it could be enjoyed by both sexes.  It is a love story, but not a romance.  It has elements of mystery. It is a novel of family secrets, a novel to be cherished. 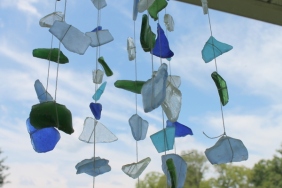 Thanks once again to NetGalley and the Penguin Group for providing me with a digital copy in consideration of this review.

Karen White is a New York Times bestselling author and currently writes what she refers to as ‘grit lit’—southern women’s fiction—and has also expanded her horizons into writing a bestselling mystery series set in Charleston, South Carolina.

Click here to listen to Karen White discussing her novel “The Sound of Glass”.