A novel of family secrets and the irrevocable bond of twins.

A miracle of nature. Two babies sharing the same uterus. Always close – brother and sister. Twins born together, sharing childhood memories.  But what happens when these twins reach adulthood?  The bond remains, but the individual experiences eclipse the shared ones.  Then the unthinkable happens, one of the twins dies…

Set in Edinburgh and the Scottish Pentlands, “Now that you’re gone” features protagonist Isla McTeer, a forty-two year old mother of two, loss adjuster for an insurance company, and divorced wife of a policeman.  After her divorce her twin brother moves nearby and is a stalwart support to her and her two adolescent children.  As the novel opens she learns of her twin brother Dougie’s sudden death.  The shock, pain and denial, are eventually replaced with the need to know the whys, hows and reasons for his passing.  Dougie was an ex-marine, a fit man who was an excellent swimmer.  How could he have drowned in the Clyde River? Why was he in Glasgow anyway?  How can she go on without her twin? 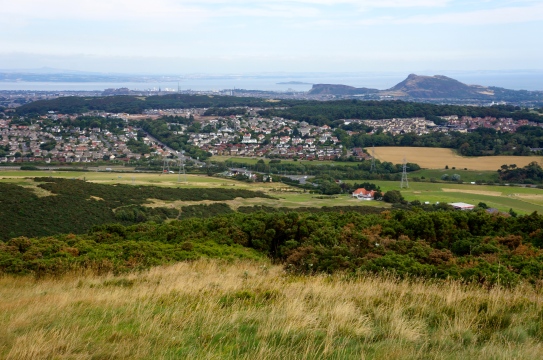 view of Edinburgh from the Pentland Hills

Dougie worked as a private investigator for the same insurance firm that Isla works for.  Could the reason for his death lie with a case he was working on?  Isla attempts to investigate Dougie’s death and the events surrounding it.  In so doing she puts herself in mortal jeopardy and learns of family secrets that shed new light on her relationship with those she loves the most.

Isla was a fully developed character amid a novel of well-rounded characters.  The raw pain of loss was portrayed in excruciating detail.  The setting was well described and added to the narrative.  The family dynamic was believable and realistic.  The closeness of the siblings was made evident via Julie Corbin‘s method of narrating the story to her dead brother.  Altogether an enjoyable novel and one which I heartily recommend.  I appreciated the writing style and the subject matter and will eagerly read more titles by this author.

Read an interview with the author on her novel “Now that you’re gone”.

Julie Corbin discusses sibling relationships and our mechanisms for coping with loss.

Julie Corbin is Scottish and grew up just outside Edinburgh. She frequently returns there – in person and in her writing – but for the last twenty-nine years she has lived in Sussex in a village close to the Ashdown Forest. She is trained as a nurse and combines running the medical department in a boarding school with writing novels.

Julie has written eight psychological/suspense thrillers and is working on her ninth. Her novels have been translated into eight European languages and have been described as ‘creepy and gripping’.