I confess it was the beautiful cover that first piqued my interest in the novel “A Shameful Murder“.  Atmospheric and foreboding in equal measure.

A well researched historical mystery set in Cork, Ireland in the early 192

0s – just after the War of Independence and the partitioning of the country – the novel introduces us to a trio of sleuths led by an unforgettable protagonist.

During this episode of Irish history Cork is a city with a precarious class structure of haves and have nots.  The novel accurately depicts the social inequalities of the time with particular emphasis on the lack of women’s rights.  The affluent live in mansions with servants.  The poor exist with up to nine people living and sleeping in one room.

Cork is prone to flooding, and the year of 1923 was particularly bad. The River Lee encircles the city and the water is both above and beneath the streets. 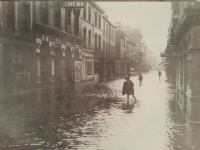 Each chapter of “A Shameful Murder” is preceded by words of wisdom by Saint Thomas Aquinas from whom our protagonist took her name.  Now in her seventies, Reverend Mother Aquinas leads a teaching order of nuns. She uses her keen intellect and empathy to it’s best effect when she discovers the body of a young woman washed up in the flood waters outside the convent.  She sends for police Sergeant Patrick Cashman, a former pupil.

Part of a newly formed police force of ‘civic guards’ Patrick is well-suited to police work and makes up for his lack of cleverness by being diligent, hard-working, methodical and tenacious.  He along with Dr. Scher, a friend of the Reverend Mother, round out a trio of sleuths who together solve the mystery of the young woman’s death.

The Reverend Mother came from an affluent background and she maintains an insider’s knowledge of the machinations of the upper class.  When the body is identified by one of Cork’s rich patriarchs, she uses her contacts to help her gain a picture of what must have happened.

With themes of avarice and social injustice, the novel will appeal to anyone who is interested in historical mysteries and Irish history in particular.  Using real places with morbid histories such as Cork’s Eglinton Asylum and the use of a few choice ‘red herrings’ thrown in for good measure “A Shameful Murder” ensures a satisfying mystery series debut.

This is the first book I have read by Cora Harrison and I fully intend to follow the adventures of Mother Aquinas in future novels.

Many thanks to Severn House via NetGalley for the opportunity of reading and reviewing this title.

1 Response to “A shameful murder” by Cora Harrison – Book Review