Posted on October 6, 2015 by Fictionophile

Sometimes the cover really does sell the book.   Such was the case with Louise Walters’ “Mrs. Sinclair’s suitcase“.  A cover that is immediately attractive to bibliophiles – fitting because books play a role in the story.

A blog post about the role of books in “Mrs. Sinclair’s suitcase“.

First we meet Roberta, in her early thirties, who works at “The Old and New”, a bookshop who struggles to make a profit.  She was hired by the owner, Philip to aid him in the shop.  Roberta lives alone with her cat, and has little in the way of a social life.  Her mother left the family when Roberta was small and she was brought up by her father (now terminally ill) and her grandmother.  She collects letters and other objects that she finds in the used books that they sell.   She stores these treasures in a suitcase that once belonged to her dear Babunia, her grandmother.   One of the letters she finds was written by her grandfather and its cryptic message begets a family mystery which Roberta tries to solve.  This presents quite a challenge, as she doesn’t want to upset her dying father or her grandmother who is now 110 years old and living in a nursing home.

For the most part a historical novel, “Mrs. Sinclair’s suitcase” has two protagonists in two different time periods – a grandmother’s story and a granddaughter’s story.  This dual narrative device works particularly well with a family saga such as this one.

I liked the grandmother’s story the best.  Originally from Oxford, Dorothy married on her 34th birthday to escape a domineering mother.  Her mother highly disapproved of her husband, Albert, deeming him ‘beneath her’.  By 1940 Dorothy Sinclair was a married woman living in Lincolnshire. Dorothy’s escape to a new life hadn’t turned out as she had hoped.  She longed for a child and was repeatedly disappointed with miscarriage after miscarriage.  Then with her sixth pregnancy, Dorothy carried the baby to term and worked arduously to sew a layette for her little miracle.  She stored these baby clothes in a suitcase under her bed.  Alas, baby Sidney was born with the cord tight around his neck…    After the stillbirth of their son – Albert absconded the family home to ‘join up’ leaving Dorothy to take in ‘land girls‘ and copious amounts of laundry.  Her tedious existence is forever changed when one day a hurricane crashes in a field near her home.  She heard the noise of the impending crash and ran out to the field – thinking she had nothing else to live for….  The poor pilot died – but villagers and the nearby air force base thought her courageous for trying to ‘save’ the pilot.  Dorothy knew better.

The next day Jan Pietrykowski, a Polish air squadron leader came to her cottage to thank her.  An immediate and reciprocal attraction ensured that Dorothy at last had fallen in love.   Jan made her feel complete at last.  Sadly he had to fly his fighter plane in the war, and was gone for many, many months.   His letters she stored in the suitcase with her baby son’s unused layette.

Events transpired that forced Dorothy to make a decision that tested the very fiber of her being, an ethical dilemma, that would be a very difficult and life changing choice for her.

Filled with delightful imagery, “Mrs. Sinclair’s suitcase” is a novel about loneliness, love, sacrifice, aging,  and the hardships of war.  Written with empathy for the plight of both protagonists, Louise Walters’ debut novel is one not to be missed!

Thanks to G.P. Putnam’s Sons via NetGalley for a digital copy of the novel in exchange for this honest review. 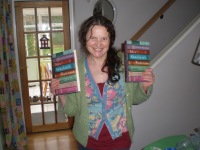