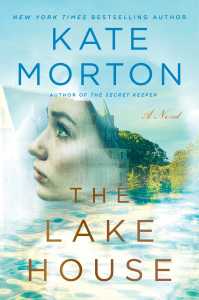 An abandoned house in enchanting Cornwall coupled with a seventy year old cold case of a missing child.  Interest piqued?  Mine certainly was.  Add to that the author is Kate Morton and I knew I was in for a treat.  I wasn’t disappointed.

1914.  The beloved home of the Edevane family called ‘Loeanneth’ is a magical place of love, laughter and contentment.  The mother, Eleanor had been brought up in the house and after marrying her husband, Anthony, he purchased it for her, an astounding gift for the love of his life.

In June of 1933 a favored baby child, the only son of the Edevane family went missing after an annual house party.  The family adored baby Theo.  Every single one of them.  Their lives were forever changed as the case was never resolved.

It turns out each of the family members carried guilt with them for the rest of their lives.  But why would they if they had nothing to do with Theo’s disappearance?

Anthony Edevane, Eleanor’s husband and greatest love – once studied to be a physician.  The war put paid to his aspirations and he came home a changed man with physical problems that prevented him from pursuing his dream of practicing medicine.

Deborah, the eldest daughter, beautiful like her mother, charming and clever as well.  Married well and had one daughter.

Alice, the middle daughter, never to be seen without her ‘notebook’ was a born storyteller who had the greatest affection and attachment to the idyllic home where she was privileged to have grown up.  She grew up to be a prolific and esteemed mystery novelist. She never married, nor did she have any children.

Clementine, the youngest daughter, a tomboy who grew up to be a pilot in WWII.

Constance, Eleanor’s mother, lived at Loeanneth under sufferance.  Hers because she would much rather be anywhere but near the sea, and Eleanor’s because there was a deep rift between her and her mother.

Outside the family, there were others who lived at the lake house.

Ben Munro was an itinerant gardener employed by the Edevane family.  He was a strong and handsome twenty-six year old who attracted the eye of the teenage Alice.

Mr. Llewellyn, a family friend from the days of Eleanor’s youth at the house. 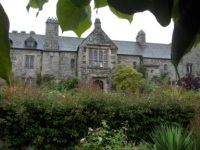 Skip ahead seventy years to 2003.  We meet Sadie, a worldly-wise London policewomen, a loner who is in trouble at work because she has committed the most grievous error of letting information slip to the media about a case.  Ordered to ‘take a break’, she visits her grandfather Bertie, in Cornwall.  One day while running with her grandfather’s two dogs, she wanders into a neglected garden near Bertie’s cottage.  Through the garden she discovers an abandoned house.  With furniture and belongings still intact, it looks as though the occupants had just left one day and never returned.  Sadie has a bad feeling about the house and her cop’s instinct kicks in.  Although she is supposed to be taking a break, she initiates an investigation into what happened at Loeanneth, the lake house.

Her investigations lead her to become acquainted with the renowned mystery novelist, A.C. Edevane (Alice), and her assistant Peter.  Together they are determined to solve the mystery of what happened at Loeanneth so many years ago…

A story about family secrets, lapses of judgement, guilt, homes lost and found, great loves, great passions, and an enchanting place in the world, “The Lake House” is a prime example of what fiction should be.  Escapism with endearing and engaging characters, myriad twists and red herrings, an idyllic setting, romance and mystery, and a satisfying resolution.

This novel will hold great appeal for bibliophiles.  The author’s love and respect for books, reading, and libraries is evident throughout her eloquent prose.  I read her novel “The Forgotten Garden” a few years ago and it remains one of my favorites.

Highly recommended!  One of my favorites of 2015!

Thanks to Atria Books via NetGalley for providing me with a digital copy of “The Lake House” for review.

Kate Morton, a native Australian, holds degrees in dramatic art and English literature. She lives with her family in Brisbane, Australia.

Watch a video of Kate Morton discussing “The Lake House”.

7 Responses to “The Lake House” by Kate Morton – Book Review