Posted on November 2, 2015 by Fictionophile

Halloween Day – of course I HAD to read a ghost story!

It is 1965 and tuberculosis has decimated James’ family – killing his parents and sister – and leaving him weak and sickly.  He is sent to convalesce at his Uncle’s house in Dorset.  The house is large and seems to hold many secrets.  James’ father and his uncle had become estranged, so James had never before met his uncle Thomas.  Creepy and eerie goings on in the house capture his childish imagination.  He hears crying and music at odd hours.

He befriends Amy, a young maid at the house who tells him of her time in an orphanage.  How during the summer holidays James’ uncle would invite some of the orphans to stay at his house.  It seems Thomas Bentley is “a pillar of the community” and prone to altruistic endeavors.

Since James is in a weakened state he is more susceptible to the spirits that reside within the property.  He gradually comes to meet some of these ‘ghosts’.  Children – like him – who are doomed to reside there 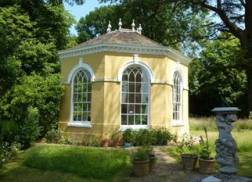 forevermore.   Why?  What could have happened to these poor children…?

With a delightfully gothic feel this novella speaks to the child reader I once was.  This is absolutely the type of book I would have relished as a preteen – which is about the age of James in the story.  I’ve always loved stories of children who are alone in the world and are sent to large houses…. I’m thinking “The secret garden” and the like.

This is the first work by Maynard Sims that I have read.  A supernatural thriller of only 87 pages, it should appeal to all ages who love traditional ghost stories.

I’m grateful to Samhain Publishing via NetGalley for providing me with this novella in exchange for an honest review.

Watch the book trailer for “Convalescence”!