Posted on November 26, 2015 by Fictionophile

Published by Nimbus Publishing, “What kills good men” is a historical police procedural mystery set in Halifax, Nova Scotia in 1899.

The setting was of special interest to me as Halifax is where I grew up and is very near where I live today.  Reading a novel in a locale with which you are very familiar sheds a different light on the reading experience.

The story follows one week of a murder investigation.  The victim was a prominent member of society, a city alderman, who was living a double life.  The policemen in charge of the murder investigation were a duo of high integrity and morals.  The elder, Culligan Baxter, was a married man and a Catholic who was burnt out, embittered, and highly judgmental.  The younger,  Kenny Squire, was just learning the ropes and was applying his keen intellect to his very first murder inquiry.  There was obviously a lot of respect between the two policemen and their rapport was a pleasure to read.

The vivid descriptions of the historic city of Halifax transported the reader to both the time and place of the book’s setting.  The characters were so well developed that the reader knows what they are thinking as well as what they are doing.  Written with thoughtful prose, the language of the novel also serves to transport the reader to the turn of the century.  You can appreciate the societal confines and almost feel the dampness of the fog and the coldness of the wind off the harbour.

The author has previously written a non-fiction work about poverty in 19th century Halifax.  The research for that work has stood him in good stead with this novel.  The historical data was accurately and skillfully portrayed with a sound rendering of class distinction, religious polarity, and the differences between the well-educated and those less so.

The chapters were quite long with each covering a day in the investigation.  The reader was reminded of the impediments faced by police during this time period and of the more tedious aspects of police work. 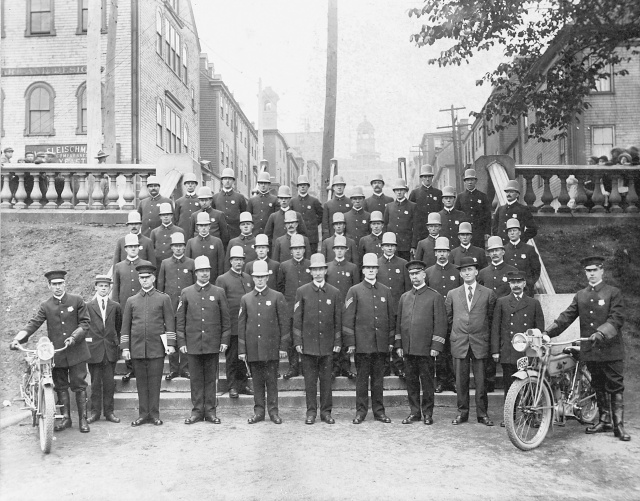 Rich in character and description, this atmospheric novel will appeal to anyone who enjoys having a little history lesson with their murder mystery.  The message of the novel was that power corrupts and nothing is black or white.  The ending was realistic in that justice does not always prevail.  My rating:

Though I know the area well, I feel the book could have benefited from a map for those less acquainted with the locale.

My bookclub read the novel for the month of November and we discussed the title’s significance.  We determined that the ‘good man‘ of the title was not the murder victim, but rather the policeman, Culligan Baxter.  What ‘kills‘ him is the fact that justice is often denied, and that the world is not black or white, but a shade of gray as murky as the Halifax fog.

David Hood grew up just outside of Halifax, Nova Scotia, and has lived in the city for many years. His previous publications include Down but Not Out, an examination of nineteenth-century poverty in Halifax. For much of the past fifteen years he has been teaching at the secondary and post-secondary levels. He is currently teaching in Singapore.   Hood said he has talked to Nimbus Publishing about a possible series. He’s started working on a second book, one that may involve an assassination attempt on the city’s archbishop.