“You” by Caroline Kepnes – Book Review

Many people I’ve talked to have had mixed feelings about this title.  One of my best reading buddies, whom I almost always agree with, didn’t like this book at all…  After initial reservations, I found that eventually – I did! 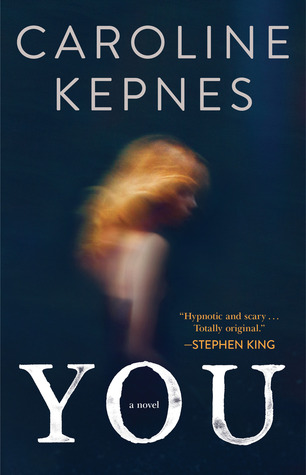 The writing style takes some getting used to.  I didn’t like it at first.  The novel reads like a run-on sentence/stream of consciousness coupled with Twitter tweets complete with hashtags.  The first person narrator is talking directly to the woman he is obsessed with, the YOU of the title who is actually a young college student/writer living in New York named Guinevere Beck.

Joe Goldberg, the narrator, is a self-taught bookshop manager in the Lower East Side. He is a very well read, charming, and good looking man.  What’s not to like you ask? Well… his obsessive nature has driven him to stalking and murder – on more than one occasion.  Never completely likable, he was nevertheless interesting in a very twisted kind of way.

A treatise on compulsive obsession, the story was disturbing, unsettling, and chilling. The manner in which Joe uses modern technology to insinuate himself into Beck’s life proves him to be a master of manipulation.  Beck, the ‘victim’ of Joe’s psychotic adoration, is not a very likable character either.  She comes across as a lying, narcissistic, sexually wanton young woman.

If you want a book where the characters make you feel all warm and fuzzy, then this is NOT it! However, if you enjoy very contemporary psychological thrillers, you will enjoy it and find yourself turning the pages feverishly.  This is the first in the author’s Joe Goldberg books.  The second, out now, is “Hidden Bodies“.  (my review to follow at a later date).

To sum it up, I believe that “You” is a cautionary tale.  We in the modern digital age have a tendency to ‘over share’ and online privacy seems to be going the way of the Dodo bird…

Thanks to Simon & Schuster/Emily Bestler Books – I won this novel in a Goodreads giveaway.

Caroline Kepnes is a native of Cape Cod and the author of many published short stories. After graduating from Brown University, Caroline moved to New York where she covered pop culture for Entertainment Weekly and Tiger Beat. She also worked as a staff writer on the first season of ABC Family’s The Secret Life of the American Teenager. Caroline’s second novel, Hidden Bodies, is the follow-up to her debut novel, You, which was optioned by Showtime. Caroline now lives in Los Angeles, where she writes fiction, drinks artificially sweetened caffeinated beverages, and avoids freeways.

7 Responses to “You” by Caroline Kepnes – Book Review