Posted on April 1, 2016 by Fictionophile

Are we as a society too apathetic?  Do we not want to become involved – just carry on with our own self-centered lives?  This novel asks the question “How far would you go to help a stranger?” 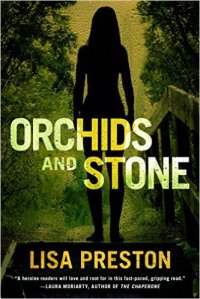 Strong on characterization, “Orchids and Stone” introduces the reader to Daphne Mayfield.   Her elder sister was murdered years ago, then on her sister’s birthday, having not being able to cope any longer, her father took his own life.  No longer able to endure her mother’s sadness and childishly blaming her mother for her father’s fate, Daphne dropped out of college, moved in with her best friend Thea, and began work as a roofer.

She found that the hard physical labor was therapeutic.  She had found her niche.

Then four years ago she met Vic (divorced with shared custody of his young son and daughter) and his lovely dog, Grazie. Now they are her family.

One day, whilst in the park, Daphne encounters an elderly lady who pleads for her help.  She says that ‘they’ are trying to kidnap her and take her house and belongings.  At first Daphne suspects that this is just the ramblings of an old lady suffering from dementia – then, after reflection, she begins to doubt herself and wonder if the old lady was telling the truth!

Daphne believes, as her father did before her, that if only someone had seen something, or done something when her sister disappeared, then the family might have been saved…  If someone hadn’t been so reluctant to be ‘involved’.  “Bystander effect“.

With the help of her journalist friend Thea, Daphne discovers the old lady’s address.  She goes there to hopefully ease her mind about her previous apathy.  Once there however, she makes a discovery that will impact her life and the lives of the ones she loves.  Despite the disapproval and lack of understanding of her family and friends, Daphne perseveres in her quest to save the elderly woman.

Half domestic drama, half crime thriller, “Orchids and Stone” is a well rendered debut novel.  The Washington State setting and action-packed scenes ensured that it was a fast read.  I admired how the characters interacted and I rooted for Daphne’s altruism. Also, I enjoyed the realistic domestic scenes within the blended family.  And, I always appreciate it when the title of the novel ties in brilliantly to the plot.

ks to Thomas & Mercer and Little Bird Publicity for providing me with a digital copy of this novel for review purposes.

I am hosting a giveaway of a print copy of the book.  Regretfully, the giveaway is only open to contestants within the continental United States.  To enter, simply ‘like’ or ‘comment’ on this review before April 11th, 2016.

racehorses from a rescue facility. She turned to writing, working on both mysteries and mainstream novels. She also began competing in the obscure sport of Ride and Tie, a back country trail race that combines running and riding, covering distances of 20-35 miles.  Her rescue dog V-scored at his first trial and she offered the log book to a publisher. Contracts for more books on animal care and training followed. Lisa’s articles and essays have appeared in magazines and anthologies. Her debut novel, Orchids and Stone, is on sale now!

4 Responses to “Orchids and Stone” by Lisa Preston – Book Review