“The boy from Zion Street” by Geoffrey Seed – Book Review 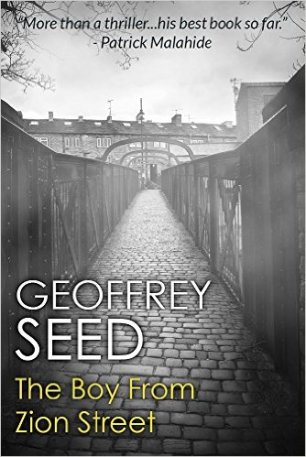 Like many historical novels, “The Boy from Zion Street” contains two separate time periods – the star of each in this novel is Spencer White.

In the present day Spencer is an esteemed judge who is retiring imminently.  More than ready for his impending retirement he is looking forward to spending his days puttering on his narrowboat that he named for the street of his childhood.

Then he is called upon to try one last case. This case will let his distinguished career end on a high note and might even bring about other accolades such as a knighthood!.  This pleases Elspeth,  his wife of over thirty years, immensely.  The case will bring him back to Manchester and a controversial case of deaths while in police custody.  Against his better judgement he is thrust into the limelight as he attempts to conduct an impartial inquiry into the deaths.

In the second story line it is 1955 and Spencer is the sensitive and innocent boy who lives in poverty on Zion Street in Manchester.  Spencer is an only child and the victim of polio.  His arm is withered and he bears the brunt of teasing and bullying because of it.  His father is a war veteran and an alcoholic.  Joan, his mentally fragile mother, dotes on her son.  Joan works as a cleaner for a wealthy Jewish college professor.  The professor, Zilla Arbib, befriends Joan and has a soft spot for the intelligent and quiet Spencer.  She encourages his potential and acts as his mentor.  Also in Spencer’s life are his extended family of aunts and uncles.  It is at their house that he feels the most cherished and safe. 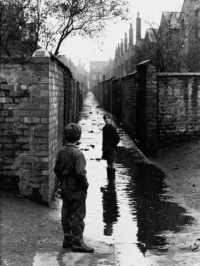 One day Joan tries to sell off two art prints given to her by her husband’s father.  She was given to believe that they were valuable and she is trying to keep food on the table.  The dealer she shows them to is a police informer.  The pictures were stolen during a suspected murder during the war.  Her innocent and desperate action has far-reaching effects for both her – and most especially, her son, Spencer.

More than a political thriller, “The boy from Zion Street” is a novel of family secrets and defying the odds.  Spencer’s story illuminates how you bring the past with you whether you intend to or not.  The past shapes your future, but you have the power to alter the shape if you have the strength and determination.  Another theme throughout the novel is the old adage “You reap what you sow” with the belief that “debts of all types must be paid off one day – and with interest”.  Every action has consequences, if not for you, then for others.  Overzealous policeman, political corruption, memorable characters and a jaw-dropping ending, serve to make “The boy from Zion Street” a very enjoyable read.

Thanks to Endeavor Press for supplying me with a digital copy of this novel in exchange for my unbiased review.

Geoffrey Seed is a former newspaper and TV journalist. After leaving the Daily Mail, he worked for every leading current affairs programme – Granada’s World in Action, BBC Panorama and the ITV series, Real Crime, which critically re-examined controversial murder cases.

He specialised in producing major TV investigations – from cocaine smuggling in Columbia and political repression in the Soviet Union to torture in southern Africa and the British army’s covert involvement in terrorism in Northern Ireland.

He is married with three grown up children, and lives in mid Wales.