“What the waves know” by Tamara Valentine – Book Review 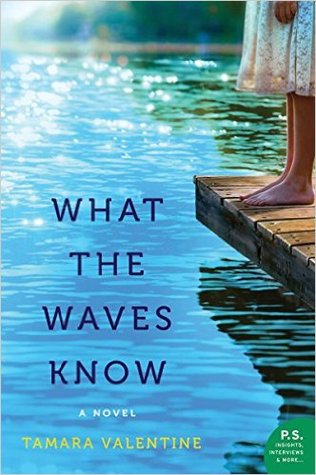 Izabella Rae Haywood adores her father who she says is “one-eighth Narragansett Indian and seven-eights mystery”.   He takes her to Tillings Island, where he has roots.  They fish together and share a deep bond.   But her parents argue more and more.  On her sixth birthday after the fighting mounts her childish frustration she screams at him “I hate you!  I wish you would just go away!”  Believing she has somehow invoked her birthday wish, she blames herself when he does leave.  She can no longer speak.

The trauma caused by the loss of her beloved father has rendered her silent.

She is weakened by her muteness, ostracized by her peers, misunderstood and fearful.  Eight years pass and despite the intervention of therapists, counselors, social workers and psychiatrists Izabella’s silence continues.

In 1974, on the occasion of Isabel’s fourteenth birthday, her mother presents her with a Shar Pei puppy (which she names Luke)

and resorts to desperate measures to restore her voice.  In an attempt to get to the causes of Izabella’s muteness,  they return to Tillings Island where her father disappeared. They encounter island folk who seem to know more than they are saying.  Like her father, the island is shrouded in mystery and magic.  But it is here, where her father was last seen, that she hopes to gain an understanding of why she is mute and also to understand her relationships with those she loves the most.  What will this tiny island reveal?

Once ensconced on the island, Izabella makes friends and enemies that turn into friends.  She comes to understand that words have power and meaning, and that the tone in which they are delivered is a communication all its own.

She meets Remy, a woman who knows her mother and remembers her father.  Though an adult, Remy is a kindred spirit to Izabella and helps her to come to terms with her guilt and teenage angst.   As Remy enlists their help to prepare for the October Festival of Yemaya, events conspire to bring forth Izabella’s recollection of that fateful night when her father left.

Unlike real life, fiction is one place where it is simple to ‘listen’ to the mute.  We have the advantage of hearing Izabella’s thoughts.  We yearn for her to speak – and to understand the trauma that led to her years of silence.  We come to understand that trauma when she does, through her memories.

A well-rendered debut novel with vivid imagery and characters that will be hard to forget.  A slower paced yet thought provoking story that speaks to the elusiveness of memory and the destructive force of memory to both heal and torment.  It is a story of the mentally ill and how their illness has the ability to ripple out to others in their lives. Especially the children of the mentally ill.

A novel of loss, memory, mothers and daughters, loneliness, and about how we judge others, often without a full understanding to base our judgement upon.

Thanks to William Morrow/HarperCollinsPublishers via Edelweiss for providing me with an uncorrected digital ARC of this novel in exchange for my unbiased review.

There is a reading group guide available for “What the waves know”.

Tamara Valentine obtained an M.A. with distinction from Middlebury College and has spent the past 14 years as a professor in the English Department at Johnson & Wales University. Presently, she lives in Kingston, Rhode Island, with her husband and three children.