Two years ago I read and reviewed a novel called “Bittersweet“ by Miranda Beverly-Whittemore so when I was offered a spot on the TLC Book Tour for her new novel I jumped at the chance!

Like “Bittersweet” this new novel is peopled with realistic and well-developed characters.  Some are likable and some are not – but they all engage the reader.

In the present we meet Cassandra Danvers, a photographer who has just returned to her small hometown following a traumatic break-up in New York.  Also, she has recently suffered the loss of her beloved grandmother June, who raised her following the deaths of her parents when she was just a child.  Cassie is in denial about just about everything in her life.  Depressed and grieving, she has squirreled herself away in “Two Oaks” the old mansion left to her by her grandmother.  The house is in poor repair with leaks, critters, and many layers of grime.  Cassie lives in this three story house by herself relishing her self-inflicted solitude.  She seldom leaves and neglects her surroundings including the mail which is piling up inside the door.

Situated in a small town in Ohio, the house has seen a lot of life, love, and heartbreak.  The author has taken the liberty of making “Two Oaks” sentient.  A charmingly fanciful ploy that might not be accepted by some readers, but was welcomed by this one.  I’ve always imagined that really old houses must have memories…

One day Cassie is tormented by a persistent ringing of the doorbell.  She finally responds and is shocked to discover that the caller has life-altering news for her.  A famous movie star named Jack Montgomery has left her millions of dollars in his will!  The catch being that his family, in particular his daughter Tate Montgomery (a movie star herself) is contesting the will.  She wants a DNA test done to prove Cassie’s blood connection.  If she IS a relation she will inherit everything – if she isn’t a relation Tate has agreed to bequeath Cassie one million dollars as compensation.  Talk about a win-win situation!  One million dollars would go far towards fixing up “Two Oaks” and returning it to its former glory, but Cassie is reluctant to offer her DNA and stubbornly refuses.  Tate and her two assistants, Nick and Hank move in with Cassie to see if they can persuade her and to search for any pertinent documentation of June’s supposed affair with Jack Montgomery.

Flashback to 1955.  June and her mother live in the house of their distant relative after June’s father suffered war neuroses and financial setbacks.  June’s younger friend Lindy lives across the street.  Lindy is devoted to June.  At first I believed it to be a ‘girl crush’ common to adolescent girls, then I came to suspect it went far deeper than that.   Lindy sneaks into June’s bedroom at night.  The girls talk, snack, and peruse movie magazines.  They couldn’t be more different.  June is a beautiful and feminine young woman whereas the younger Lindy is a tomboy who dresses in overalls and goes barefoot. Lindy tries to discourage June from going through with her impending marriage to Artie Danvers. 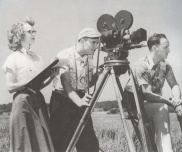 The small Ohio town where “Two Oaks” is situated is slated to be a motion picture location!   When Lindy learns that the infamous Jack Montgomery is coming to town she is very excited and applies to work on the set as a sort of ‘jack of all trades’.  She fetches, carries, sews, and generally makes herself useful.

When Jack the leading man meets the small-town girl June, there is an instant attraction.  In an era when movie studios manufactured relationships between their stars for publicity purposes, Jack is already spoken for.  Lindy is complicit in furthering the relationship between June and Jack!  What follows will have repercussions for decades.

As I mentioned earlier, the characterization in this novel was top notch.  As were the use of apt and charming descriptive phrases.  I loved the language of the novel with many of the sentences almost artistic in their rendering.  (“on her bicycle, she turned in to the Elm Grove Cemetery, speeding past those gray headboards of eternal rest”) and (“her lustrous hair had grown thin and her face had been swallowed by a conspiracy of chins.”)

With a satisfying ending that leaves no loose ends, “June” is a novel of family secrets, friendship, desperation, deception, sacrifice, and lost love that is sure to please its intended audience.

Thanks to Crown Publishing, NetGalley and TLC Book Tours for providing me with a digital ARC of this novel in exchange for my unbiased review.

TLC Book Tours has graciously allowed me to host a giveaway!

Visitors to my blog who leave a ‘comment‘ or click on ‘like‘ for this post before June 21st will be entered in a draw to win a print copy of “June“.  Draw is limited to residents of the United States and Canada.  Good luck!

MIRANDA BEVERLY-WHITTEMORE is the author of three other novels: New York Times bestseller Bittersweet; Set Me Free, which won the Janet Heidinger Kafka Prize, given annually for the best book of fiction by an American woman; and The Effects of Light. A recipient of the Crazyhorse Prize in Fiction, she lives and writes in Brooklyn.