My name is Andrew Joyce, and I write books for a living. One morning, about five years ago, I went crazy. I got out of bed, went downstairs, and threw my TV out the window. Then I sat down at the computer and wrote my first short story. I threw it up on a writing site on the Internet just for the hell of it. A few months later I was notified that it was to be included in an anthology of the best short stories of 2011. I even got paid for it! I’ve been writing ever since.

Lynne has been kind enough to allow me a little space on her blog to promote my new book, RESOLUTION: Huck Finn’s Greatest Adventure, so I thought I’d tell you how it came about. 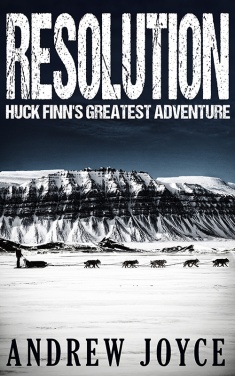 My first book was a 164,000-word historical novel. And in the publishing world, anything over 80,000 words for a first-time author is heresy. Or so I was told time and time again when I approached an agent for representation. After two years of research and writing, and a year of trying to secure the services of an agent, I got angry. To be told that my efforts were meaningless was somewhat demoralizing to say the least. I mean, those rejections were coming from people who had never even read my book.

I had just finished reading Mark Twain’s Huckleberry Finn for the third time, and I started thinking about what ever happened to those boys, Tom and Huck. They must have grown up, but then what? So I sat down at my computer and banged out REDEMPTION: The Further Adventures of Huck Finn and Tom Sawyer in two months; then sent out query letters to agents.

Less than a month later, the chairman of one of the biggest agencies in New York City emailed me that he loved the story. We signed a contract and it was off to the races, or so I thought. But then the real fun began: the serious editing. Seven months later, I gave birth to Huck and Tom as adults in the Old West. And just for the record, the final word count is 79,914. The book went on to reach #1 status in its category on Amazon (twice) and won the Editor’s Choice Award for best Western of 2013. The rest, as they say, is history.

My agent then wanted me to write a sequel, but I had other plans. I was in the middle of editing down my first novel (that had been rejected by 1,876,324 agents . . . or so it seemed) from 164,000 words to the present 142,000. However, he was insistent about a sequel, so I started to think about it. Now, one thing you have to understand is that I tied up all the loose ends at the end of REDEMPTION, so there was no way that I could write a sequel. And that is when Molly asked me to tell her story. Molly was a minor character that we met briefly in the first chapter of REDEMPTION, and then she is not heard from again.

So I started to think about what ever happened to her. After a bit of time—and 100,000 words—we find out what did happen to Molly. It is an adventure tale where Huck Finn weaves through the periphery of a story driven by a feisty female lead. Molly Lee was my second book, which achieved #2 status on Amazon.

Now I was finished with Huck Finn and Tom Sawyer for good. Now I could go back to my first novel and resume the editing process.

It was then that Huck and Molly ganged up on me and demanded that I resolve their lives once and for all. It seems that I had left them hanging, so to speak. Hence, RESOLUTION: Huck Finn’s Greatest Adventure. Here is the blurb from the back cover of the book:

It is 1896 in the Yukon Territory, Canada. The largest gold strike in the annals of human history has just been made; however, word of the discovery will not reach the outside world for another year.

By happenstance, a fifty-nine-year-old Huck Finn and his lady friend, Molly Lee, are on hand, but they are not interested in gold. They have come to that neck of the woods seeking adventure.

Someone should have warned them, “Be careful what you wish for.”

When disaster strikes, they volunteer to save the day by making an arduous six hundred mile journey by dog sled in the depths of a Yukon winter. They race against time, nature, and man. With the temperature hovering around seventy degrees below zero, they must fight every day if they are to live to see the next.

On the frozen trail, they are put upon by murderers, hungry wolves, and hostile Indians, but those adversaries have nothing over the weather. At seventy below, your spit freezes a foot from your face. Your cheeks burn—your skin turns purple and black as it dies from the cold. You are in constant danger of losing fingers and toes to frostbite.

It is into this world that Huck and Molly race.

They cannot stop. They cannot turn back. They can only go on. Lives hang in the balance—including theirs.

There you have it. Now, if you nice people will just go out and buy RESOLUTION, perhaps Huck and Molly will leave me alone long enough so that I can get some editing done on my first novel.

Thank you for having me over, Lynne. It’s been a real pleasure.

Andrew Joyce left high school at seventeen to hitchhike throughout the US, Canada, and Mexico. He wouldn’t return from his journey until decades later when he decided to become a writer. Joyce has written four books, including a two-volume collection of one hundred and forty short stories comprised of his hitching adventures called BEDTIME STORIES FOR GROWN-UPS (as yet unpublished), and his latest novel, RESOLUTION. He now lives aboard a boat in Fort Lauderdale, Florida, with his dog, Danny, where he is busy working on his next book, YELLOW HAIR.

Yes, I have always loved to read about history, and I think I’ve read most of the classics—American and otherwise.

The premise for using Twain’s characters just came to me and it felt right. I explain my motivation in more detail in the accompanying guest post. But one thing that I did not write about is the fact that I felt Sam Clemens egging me on while I wrote the first book. He started a book with Tom and Huck as adults, but never finished it. Perhaps I was just his scribe so he could get it out of his system, so to speak.

I don’t measure research in hours. Depending on the book, it could be months or years. The book I am currently working on took about a year of research. Resolution took about three months.

Not that I can remember.

I’m sure there are some authors that can do justice writing a novel and describing a locale they have not personally experienced. I’m not one of them. To get the feel for a Yukon winter and dog sledding, I had to read everything I could get my hands on concerning the subjects. I read novels written by men who lived that life, i.e. Jack London, et al. I read first person non-fiction accounts (memoirs), third person non-fiction accounts (biographies), and news articles from old newspapers. After months of that steady diet, I thought I might be able to do my Yukon winter justice. I hope that I succeeded somewhat.

The novel starts off in Colorado, progresses to Alaska, then to the Yukon, and then back to Alaska. It ends up in Montana. But to answer your question: If someone is kind enough to buy the result of my labors and then take the time to leave a review, anything they say is fine with me.

I’ve been extremely fortunate. To date, I’ve published three books and they are averaging 4.7 stars on Amazon. If all my reviews were bad, I’d stop writing. I’ve gotten a few one and two stars in my day. It always hurts a little, but you’ve got to realize that different people have different tastes. You know . . . different strokes . . .

I love to read Steinbeck, Jack London, or Beryl Markham when I want to experience beautiful writing. When I just want to sit down with a book and read it in one sitting then Lee Child or Baldacci will do (I can’t put their stuff down).

Here are three samples (all by John Steinbeck) of beautiful prose that could almost be considered poetry:

“The concrete highway was edged with a mat of tangled, broken, dry grass, and the grass heads were heavy with oat beards to catch on a dog’s coat, and foxtails to tangle in a horse’s fetlocks, and clover burrs to fasten in sheep’s wool; sleeping life waiting to be spread and dispersed, every seed armed with an appliance of dispersal, twisting darts and parachutes for the wind, little spears and balls of tiny thorns, and all waiting for animals and the wind, for a man’s trouser cuff or the hem of a woman’s skirt, all passive but armed with appliances of activity, still, but each possessed the anlage of movement.”—The Grapes of Wrath

“The afternoon came down as imperceptibly as age comes to a happy man. A little gold entered into the sunlight. The bay became bluer and dimpled with shore-wind ripples. Those lonely fishermen who believe that the fish bite at high tide left their rocks and their places were taken by others, who were convinced that the fish bite at low tide.”—Tortilla Flat

“June is gay—cool and warm, wet and shouting with growth and reproduction of the sweet and the noxious, the builder and the spoiler. The girls in the body-form slacks wander High Street with locked hands while small transistor radios sit on their shoulders and whine love songs in their ears. The young boys, bleeding with sap, sit on the stools of Tanger’s Drugstore ingesting future pimples through straws. They watch the girls with level goat-eyes and make disparaging remarks to one another while their insides whimper with longing.”—The Winter of our Discontent

My mission, first and foremost, is to entertain. I tend to be a bit didactic on occasion, but the message is always embedded between the lines. Some people pick up on it, some don’t. But my job is to keep people turning pages.

Thanks to Andrew Joyce for taking the time to quell my curiosity.  I wish him every success with his new historical action/adventure novel, “RESOLUTION: Huck Finn’s Greatest Adventure“.