“No one knows” by J.T. Ellison – Book Review 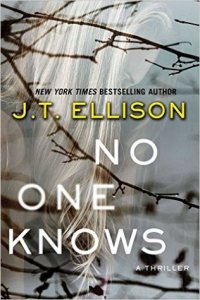 Aubrey Hamilton is a damaged and grieving woman.  Scarred by the death of her parents at a tender age, then again by her unsavory experiences at the hands of a foster parent, she thought her husband Josh had saved her.  That is until he vanished five years ago – the same night as his best friend’s bachelor party.  A hard-working young doctor, Josh’s disappearance seemed so out of character for him.  Though his body was never discovered, due to the copious amounts of his blood found in their home, Aubrey was arrested and charged for his murder. Due to insufficient evidence, the charges were dropped and Aubrey was released.  Released to a life without Josh, where she has only her dog, Winston,

and her job as a Montessori teacher to sustain her.  Her only outlet is running, and she runs through Nashville’s streets for emotional release.

Then, five years after his disappearance, around the time that Josh is declared dead, Aubrey meets a man who has eerily similar characteristics as Josh.  His name is Chase Boden.  She wonders if she could love again…

I wondered (as I was meant to) if Chase was Josh – or was it just one of the red-herrings the author utilized to help ratchet up the suspense?

Then there is Daisy, Josh’s mother.  Initially a very unlikable character, I came to pity her as I got more into the book.  After trying to overlook her extreme shallowness, I realized that she too is mourning Josh.  Inexplicably, Daisy always hated Aubrey, since she was a young girl.  We learn that Daisy is contesting that Aubrey will receive Josh’s $5 million life insurance payout.

We meet Tyler, Aubrey’s ex-con, criminal, foster brother.  He knows more than he is saying about Josh’s past and his disappearance.

A book of lies, betrayal, desperation, deception, and broken hearts.  This novel will have a strong appeal for fans of romantic suspense.  Though it is touted as a ‘thriller’ (and it DID contain numerous plot twists toward the end), I personally consider it to be more romantic suspense than thriller.  For this reason I am probably rating it lower that I would if I was a bigger fan of romantic suspense.  It WAS enjoyable, but I found the plot to be a tad gimmicky and predictable…

Thanks to Gallery Books via NetGalley for providing me with a digital copy of the novel in exchange for my honest review.

6 Responses to “No one knows” by J.T. Ellison – Book Review