“The kind worth killing” by Peter Swanson

“The kind worth killing” has been on my radar for some time.  I kept hearing about it through friend recommendations and on Goodreads.  I was delighted when I learned that my bookclub, Whodunit, had this title featured for their August read. 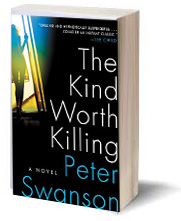 For the first quarter of the book, I wondered if it was just a modern retelling of Patricia Highsmith’s “Strangers on a train” – only this one was “Strangers on a plane“.  Then the first twist showed up, then the second, then I realized I had unfairly misjudged it.

The characters were not that likeable, but they were intriguing.

Lily Kintner, a young and beautiful redhead, who has deep secrets and an eccentric, some would say abusive upbringing.  She is a loner, who has been disappointed by her relationships with others her whole life. Lily has a unique moral code that some would consider abhorrent verging on the sociopathic.

Miranda Severson, a raven haired beauty content to get though life on her looks.  A manipulative , duplicitous, and self-absorbed user.

When Ted and Lily meet at Heathrow waiting for a flight back to Boston, Mass. they ‘overshare’ over a few drinks in the airport bar.  Ted reveals that his wife has been unfaithful and that he would like to kill her…  Lily lets Ted know that if he is serious about this, that she will aid him in his endeavor…

Lily’s thinking?  “What difference does it make if a few bad apples get pushed along a little sooner than God intended? And your wife, for example, seems like the kind worth killing.”

Ted is in the process of having a McMansion built on a beautiful, though rugged strip of Maine coastline.  Miranda has been ‘on site’ supervising the build.  The contractor they hired is Miranda’s lover.

With beautiful scenes in Maine, Connecticut, London and Boston coupled with some fantastic dwellings, this novel would work very well as a movie.  (I imagine Nicole Kidman would make an excellent choice for Lily.) In fact, it has already been optioned for a film adaptation.

Any novel that includes murder MUST have a police presence.  In this one it was detective Henry Kimball of the Boston, Mass. police.  He and his female partner showed up in the last third of the book, but their characters were strong enough to make them a few of my personal favorites.

The author’s love of Alfred Hitchcock is obvious as “The kind worth killing” has an almost Hitchcockian feel.   It is a page-turner of a morality play that persuades the reader to suspend belief long enough to savor the compelling plot and characters. It includes satirical humor and is a fast-paced novel of betrayal and revenge. A quick read due to the short chapters told by alternating persons.  The ending will feel very satisfactory, especially to those readers who crave justice.

The long and the short of it?  I enjoyed it very much and would heartily recommend it to anyone who enjoys psychologically driven thrillers.

I purchased this book as it was the choice of my ‘in-person’ bookclub, Whodunit.

Peter Swanson is the author of three novels: The Girl With a Clock For a Heart, an LA

Times Book Award finalist; The Kind Worth Killing, winner of the New England Society Book Award, and finalist for the CWA Ian Fleming Steel Dagger; and his most recent, Her Every Fear. His books have been translated into 30 languages, and his stories, poetry, and features have appeared in Asimov’s Science Fiction, The Atlantic Monthly, Measure, The Guardian, The Strand Magazine, and Yankee Magazine.

4 Responses to “The kind worth killing” by Peter Swanson