“Under the harrow” by Flynn Berry – Book Review

Posted on September 21, 2016 by Fictionophile

An outstanding debut thriller, “Under the harrow” is a ‘harrowing‘, disturbing, yet compelling read with a twist that is more like a hairpin curve.

Nora Lawrence is a writer whose day job is working for a landscape designer. We first meet Nora, our protagonist/narrator, when she leaves London by train to visit her sister Rachel. Rachel , a nurse, lives in an old farmhouse outside of Oxford.   Rachel’s job seemed to be stressing her out more than usual of late so Nora intends to cheer her up with a bottle of wine and a weekend of long heart-to-heart chats. What she finds when she arrives at her sister’s farmhouse forever changes her life.

Nora is demented with grief.

Her grief and anguish is palpable.  She is stunned with shock.  She thinks of things she wants to tell Rachel and is in denial of her death.  She cannot believe that Rachel will never again listen to her favorite music, watch a film, eat her favorite foods, etc. She cannot believe that her life can go on without her sister, best-friend, and favorite person, Rachel.  She cannot fathom a future without Rachel in it. Nora begins to feel survivor’s guilt.  She is now quite alone in the world.

When just a teenager, Rachel was viciously attacked.  Could her murderer be the same man?  For years afterward, both sisters actively sought to find this man who had escaped justice.

The police investigation into Rachel’s murder is headed by D.I. Moretti from the Thames Valley Police station in Abingdon.  He conducts a thorough investigation, but with little result.  His DS Lewis becomes over-friendly with Nora…

Then, she finds that her sister has kept things from her.    For instance, they both loved Cornwall and had spent a delightful time there the previous summer.  It seems as though Rachel had planned to move to Cornwall and had already rented a flat there… and without telling Nora!

The writing is equally riveting and beautiful.  It carries the reader along with its perfect descriptive phrases and emotional torment. It contains vivid depictions of raw and tortuous grief whilst at the same time causing an overwhelming feeling of foreboding in the reader.  Is Nora who we understand her to be?  She seems to be developing a side to her personality that unsettles the reader enough for them to think badly of her…  Could Nora be psychotic? Or has Rachel’s murder caused her to become unhinged?

This debut is nothing short of exceptional. 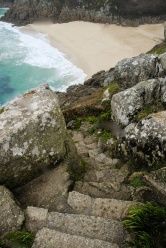 I loved every moment of reading it and found myself reading when I should have been doing other things.  If I can think of one tiny flaw, it would be that the ending seemed a tad rushed.  That being said, the ending was very satisfactory and tied up the narrative well.

“Under the harrow” will be near the TOP of my best of 2016 list.  I can’t recommend it highly enough!

Flynn Berry has a tough act to follow to better her first novel.  I look forward to her future novels with eager anticipation.

Thanks to Penguin Books via Edelweiss for providing me with a digital copy of this novel in exchange for my honest review.

Flynn Berry is a graduate of the Michener Center and has been awarded a Yaddo residency. She graduated from Brown University.
Her first novel, Under the Harrow, won the 2017 Edgar Award for Best First Novel and was named a best book of the year by The Washington Post and The Atlantic.
The title is taken from a C.S. Lewis quote: “Come, what do we gain by evasions? We are under the harrow and can’t escape”. (from “A Grief Oberserved”)

17 Responses to “Under the harrow” by Flynn Berry – Book Review