Posted on October 5, 2016 by Fictionophile 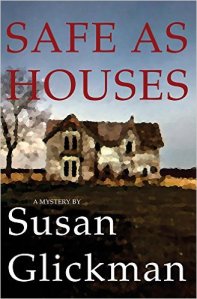 If you’re looking for the perfect combination of ‘cozy mystery’ and women’s fiction, then “Safe as houses” might just be for you!

The story is more about Liz than it is about murder.  That being said, Liz does stumble on a dead body whilst walking her dog Jasper in Wychwood Park. Why is it always dog-walkers, hikers, or, hunters that come across bodies???

Liz soon realizes that she has actually met the murder victim. He was a real estate agent who came to the door inquiring whether or not she wanted to sell the building that housed her store.  Something as dire as murder happening in her comfortable and affluent neighborhood causes Liz much stress and she begins to dwell on the murder, causing her many sleepless nights.

Liz teams up with one of her customers, a retired classics professor, and a widower, Maxime Bertrand, who aids her in mounting an amateur investigation into the murder.  Inspector Wentworth, the policeman in charge of the case is very disapproving of their efforts.

Alternating with Liz’s narrative, we hear the story of a young foster child.  Andrew James Scott, abused by his drunken mother’s boyfriend, and put into the foster system.  Unfortunately, although his foster mother was a caring person, her natural son despised the boy and tormented him relentlessly.

In a one time act of defiance, while trying to get back at his ‘brother’ by burning his airplane model, the fire gets out of control and burns the house down with his foster mother inside…  He is sent to prison at the tender age of fourteen where he suffers for many years.  This is one book where I found myself feeling very sympathetic toward the murder victim.  Poor guy seemed doomed from the start.

Liz’s love of books shines through every page of this story.  The inadequacies of the foster child system and the ‘bubble’ in the Toronto real estate market are two social issues touched upon within its pages.

I think the title alludes to the fact that from the outside, houses can seem to be safe refuges, but sometimes they hide devastating secrets…  James Scott wanted nothing more than to ‘fit in’ and be living in a place of safety and security.  Liz, comfortable in her own privileged and sheltered life, finds her own feeling of safety threatened when she stumbles on a murder victim.

A novel about parenthood, change, personal safety and doing things out of your ‘comfort zone’, “Safe as houses” was a little predictable, but an easy, enjoyable read nonetheless. I would happily recommend this book to others!

I received this novel directly from Cormorant Publishing in exchange for my honest and candid review.

Susan Glickman is a novelist, poet, critic, and teacher. Her previous fiction includes The Violin Lover (2006), which won the Martin and Beatrice Fischer Prize in Fiction of the Canadian Jewish Book Awards. Her poetry has been published in literary journals across Canada and collected in six books, including The Smooth Yarrow (2012),Running in Prospect Cemetery: New & Selected Poems (2004), and Henry Moore’s Sheep (1990). A graduate of Tufts University, she holds a masteer’s degree from Oxford and a PhD from the University of Toronto. Her book of crticisim, The Picturesque & the Sublime: A Poetics of the Canadian Landscape (1998) won the Raymond Klibansky Prize and the Gabrielle Roy Prize. She lives in Toronto, where she teaches creative writing at Ryerson University and the University of Toronto and works as a freelance editor.

4 Responses to “Safe as houses” by Susan Glickman – Book Review