Written in a dual narrative style, “The Daughters of Red Hill Hall” is set in the present day AND in 1838.

When Gemma discovers a pair of ancient duelling pistols encrusted with rubies in the basement of the local museum, she is immediately intrigued…

On a fateful night in 1838 two sisters were found shot in the cellars of Red Hill Hall. And when Gemma begins to delve deeper into their history she begins to realise that the secrets of that night are darker than anyone had ever imagined.

As the shocking events of the past begin to unravel, Gemma’s own life starts to fall apart. Loyalties are tested and suddenly it seems as if history is repeating itself, as Gemma learns that female friendships can be deadly…

I love a good historical novel – and the promise of one written in a dual-narrative style, which is one of my favorites, held great appeal.

We meet two girls in 1838.  They both reside at Red Hill Hall, a handsome family manor in Dorset.  Rebecca Winton, is the daughter of the house, the other, Sarah Cooper, is the daughter of the housekeeper.  When her mother dies, Sarah is welcomed into the family as a ‘sister’ of sorts and a best friend and companion to Rebecca. The girls are very close.  That is until they grow up and there is a man involved…

I love it when a novel tells the stories of a historic building. 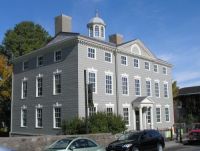 Skip ahead to the present where we meet archivist Gemma.  She works in a museum cataloguing the exhibits.  After she discovers the duelling pistols she also works at Red Hill Hall during her free time, organizing their historical documents.  She is anxious to discover the history of the pistols and the family that once lived at the Hall.  Gemma has a best friend named Natalie…. and a boyfriend named Ben.

Needless to say, the historical story and the present day story are almost mirror images of each other.  Jealousy and psychotic vindictiveness play a large role is both narratives.  The so called best friends try to sabotage the lives of the women they had previously been so fond of.  A premise which seemed unrealistic to me…

Though the descriptive passages were very well executed, what I thought would be suspenseful could be best described as predictable and somewhat formulaic.  I wasn’t a huge fan of either protagonist.  Both Gemma and Rebecca seemed rather weak and ineffectual.  So much so that I couldn’t really ‘root’ for them.

The novel contained an annoying repetition of the ‘word’ erm.  I looked it up online and the urban dictionary says that erm is a word used commonly to fill awkward space in conversations.  Well all I can say is that there must have been a LOT of awkward conversations in this novel!  Example sentence: “Erm, yes. I would like that. But would you mind if I, erm, if I brought someone else along as well?”

In short, I liked and enjoyed the story line.  The plot itself held a lot of potential, but the promised ‘twists’ ended up being predictable outcomes.  The characters were just a bit to wishy-washy for my taste.  The setting was wonderful. The writing was satisfactory, but what let it down was the scenes that contained dialogue.  Most conversations seemed contrived and stilted.

With a promising premise, “The Daughters of Red Hill Hall” just didn’t live up to my expectations.  I imagine that there are many who would like the story and the writing, but sadly this just wasn’t to my taste.

Thanks to Carina UK for approving my request for this novel on NetGalley.

Kathleen McGurl lives near the sea in Bournemouth, with her husband, sons and cats.

She began her writing career creating short stories, and sold dozens to women’s magazines in the UK and Australia. Then she got side-tracked onto family history research – which led eventually to writing novels with genealogy themes. She has always been fascinated by the past, and the ways in which the past can influence the present., and enjoys exploring these links in her novels.

When not writing or working at her full-time job in IT, she likes to go out running or swimming, both of which she does rather slowly. She is definitely quicker at writing.