“Soft in the head” by Marie-Sabine Roger

This is the engaging story of two people who come together in friendship, kindness, affection, and appreciation. A remarkable and heart-rending novel that perfectly illustrates the quote:
“Friends are the family we choose for ourselves.”

The first lines of “Soft in the head” hooked me:

“‘I’ve decided to adopt Margueritte.  She’ll be eighty-six any day now so there seemed no point putting it off.  Old people have a tendency to die.’

and I loved every word and nuance that followed. 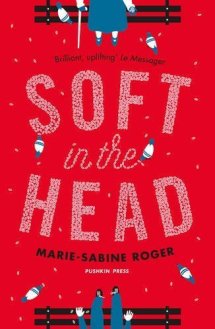 “When people are always cutting you down,
you don’t get a chance to grow.”

Germain is, by his own definition, a forty-five year old thug.  A man large in both stature and heart, who has been belittled by everyone in his life, but most particularly by his mother and his teachers.  He lives in a tiny caravan at the bottom of his mother’s garden. He and his mother seldom speak.  She considers him an ignorant nuisance, actually calls him a worthless halfwit, and has never shown him any hint of maternal love.

Eriba Puck trailer like the one that Germain lives in.

Lacking in tact and social graces, he is frequently the butt of jokes and innuendo that he almost, but not quite, understands. He is of less than average intelligence, but he has a great thirst for new words and stories.  He believes that if he knew more words he would be able to get his point across better and people would think of him as being less ‘stupid’.

But, I’m getting ahead of myself…. Germain only begins to think this way after he meets up with an eighty-six year old woman by the name of Margueritte.  Margueritte is a very intelligent and well read woman.  And, more importantly, she has time for Germain and talks to him with respect.  Respect is something that Germain has never before experienced and he finds it to be a wonderful thing.

“… she always talked to me like I was a person.
And you see, that can change a man.”

She reads him passages from the book she is reading, “The plague” by Albert Camus.  Germain is a good listener and he suspects that Margueritte’s love of books and reading are what make her ‘smart’.

“By accident, Margueritte had triggered a burning desire for thinking,
it was like my brain had a hard on.”

Germain sees beyond her exterior.  He says: “When I look at Margueritte, it’s funny, I don’t see a little old lady who weighs about forty kilos, all crumpled like a poppy, her spine a little bent and her hands all shrivelled, I see that in her head she has thousands of bookshelves all carefully catalogued and numbered.”

Margueritte introduces Germain to his own potential. She gives him a dictionary with little flash cards so that he will know what order the letters come in.  It is because of her that he discovers the riches that can be discovered in libraries.

What a delightful and heart-warming book! I’m going to recommend it to everyone I know. I haven’t enjoyed a little novel this much since Fredrik Backman’s “A man called Ove“.

I heartily recommend this novel to bibliophiles everywhere.  It is a timeless novel of human regard, respect and connection.  It is also a treatise on how books and reading open minds and expose new worlds for the reader.

It will make you smile and weep.  What more can a reader ask for?

Sincere thanks to Pushkin Press via NetGalley for providing me with a digital copy of this novel in consideration of a review.

This wonderful little story has been made into a movie called “My afternoons with Margueritte” starring Gérard Depardieu and Gisèle Casadesus.  I must say even before I knew this, I pictured Depardieu as Germain.

Published for the first time in 1989 in children’s literature, 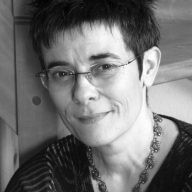 Marie-Sabine Roger has not stopped writing since, in very different registers, albums and novels youth novels for older adolescents and adults, and new novels for adults, and more recently, collaborating on screenplays with Jean Becker. In recent years, it is aimed primarily at adult readers, while continuing to write books for very young readers.

“Soft in the head” was translated by the award-winning translator, Frank Wynne.

5 Responses to “Soft in the head” by Marie-Sabine Roger