Posted on November 2, 2016 by Fictionophile

My latest reading adventure took me to Balmain, in New South Wales, Australia.  It is here that we meet Anna Southwood, a recent widow and novice private detective.  Anna found out that her late husband, Clyde, had his fingers in some highly illegal pies.  As a result, he has left her with a considerable estate, though one that has a ‘dirty‘ feel.

She now lives alone – upstairs from her ‘office’ in a two-story, sandstone house in Balmain.  This is just one of the several properties that she has inherited from her husband. Properties that she had no knowledge of prior to his death. She has a large, very furry, white cat named Toby.

how I imagined Toby would look

Her detective partner, Graham, is an aspiring actor and his hours at their detective agency are sporadic as a result.  Their business is floundering due to lack of clients.  Anna spends her days drinking and doing crossword puzzles.

Then, Anna and Graham are hired to find out what has happened to two teenage girls who are missing, presumed dead.  The father of one of the girls has hired them.  Unfortunately, he has a lot in common with Anna’s late husband in that he is a corrupt businessman.  He and Clyde were actually acquaintances.

Their investigations result in Anna’s being almost fatally injured while preparing to board the Balmain ferry, then later, being abducted.

Her traumatic experiences cause her to take up smoking again.  Which she DOES with a vengeance.  She also has a drinking problem.  One passage in the book has her home alone of an evening and downing three bottles of wine.  Another has her rising in the morning, feeling poorly from the flu, and taking two Panadols with a glass of wine, then attempting to finish the bottle!

The police’s main person of interest in the missing girls’ case is a local man of less than
average intelligence.  He lives with his mother, and had befriended both of the missing girls.  He seems an innocent who likes to build and fly kites. Anna

and Graham do NOT believe him to be guilty.

I expected to really like Anna.  She drives a funky convertible VW beetle. She likes to eat alone while reading, AND, she is a ‘cat person‘.  However… something just wasn’t clicking for me.  She left me feeling as though I didn’t care about her, and, more importantly, I didn’t care if she solved the case.  I developed what I call ‘reading apathy’ whilst reading this book.  For the most part, the writing was satisfactory, but I found certain parts of the plot were unlikely.  For instance, Anna’s injuries include broken ribs, yet the day following her release from hospital she dons an overall and goes out to her yard and gardens.  Things like that really bug me.  But then, maybe I’m a big baby.  If I had broken ribs, I would be as inactive as humanly possible. LOL

The setting of the novel was one which I was interested in. The resolution of the mystery surrounding their case was well rendered and the book ended satisfactorily. 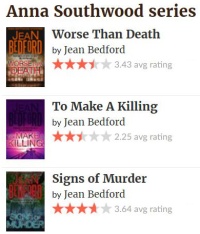 In summation, I can realize the appeal this mystery might have to some readers, however it just wasn’t for me.  Given my lengthy TBR queue, I don’t think I’ll be following up by reading the other titles in this series.

Thanks to Endeavor Press via NetGalley for providing me with this book in consideration of a review.

Jean Bedford was born in Cambridge, England but moved to Australia when she was an infant.   She has published 10 books of fiction, including 3 detective novels and a thriller.  She has also edited several collections of fiction and non-fiction. Her short stories have appeared in many literary magazines and anthologies. She has taught creative writing in several universities for over 20 years.

3 Responses to “Worse than death” by Jean Bedford – Book Review