“The mistletoe murder, and other stories” by P.D. James – Book Review

Posted on December 12, 2016 by Fictionophile

This book is a final gift from the esteemed novelist P.D. James.  A woman who understood the detective story inside and out, who had a deep understanding of human nature, and melded those two with a writing ability that continues to be coveted by many. With a foreword written by the respected and talented author, Val McDermid, this book of four Christmas-themed mystery stories is a true gem.  It will be especially appreciated by fans of James’ Adam Dalgliesh mystery series, as two of the short stories feature a young Dalgliesh! 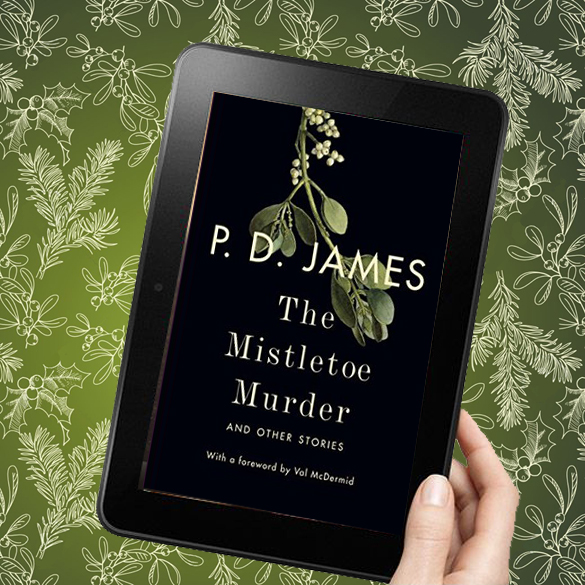 The Mistletoe Murder – The first story is a meticulously rendered English country house mystery. A murder takes place Christmas night, a night when only four people are staying at the grand Stutleigh Manor, as the butler and his wife have been given the night off to be with their families on Christmas.  The only clues are a few drops of water on the floorboards and some displaced mistletoe from over the door…

A Very Commonplace Murder – The second story features a clerk who has a secret vice.  He discovers a secret stash of pornography and trespasses in his workplace after hours to indulge his penchant for reading the illicit material. It is there that he witnesses a rendezvous between two lovers. When he hears that the woman was murdered he debates whether he should ‘step up’ and tell the police what he has witnessed, risking his job and his reputation.  This one has a delightful post twist!

The Boxdale Inheritance – The third story features a young Chief Inspector Adam Dalgliesh.  His godfather, a canon, has recently inherited a large sum of money.  Although he could sorely use the money, he is reluctant to accept as he is wary of the money’s provenance.  He enlists Dalgliesh to look into a cold case to set his mind at rest.

The Twelve Clues of Christmas – The fourth story finds a young Dalgliesh stopped in his car on the way to visit his aunt for Christmas.  A man tells him that a relative has just committed suicide and he needs to call the police as the phones at Harkerville Hall are not working.  Dalgliesh drives him to a phone box, then home to the Hall.  When Dalgliesh views the dead man’s body and the room where he lay, he notices several inconsistencies which pique his keen detective’s mind.

Although she can be quite verbose (I trait I admire), P.D. James has adapted admirably well to the confined and restricted scope of the short story.  Her characters are still well developed and her settings and descriptions well wrought.

A few of my favorite quotes/descriptions from this book:

“Bereavement is like a serious illness. One dies or one survives, and the medicine is time, not a change of scene.”

“Her mean little mouth and dark suspicious eyes suggested that her mind was as tightly corseted as her body.”

(about Stutleigh Manor) “It loomed up out of the darkness, a stark shape against a grey sky pierced with a few high stars. And then the moon moved from behind a cloud and the house was revealed; beauty, symmetry and mystery bathed in white light.”

I immensely enjoyed all four of the stories contained in this book.  My favorite was “A very commonplace murder”, due mostly to its wonderful plot twist.

I received this book from Knopf/Penguin Random House via Edelweiss in consideration of a review.

The late Phyllis Dorothy James was a prolific novelist who was constantly honing her craft right up to her death at age 94 years. Her love of words and description shines through her many novels. She was the recipient of many honors, including the Mystery Writers of America Grand Master Award and the National Arts Club Medal of Honor for Literature, and in 1991, she was honoured with the title of Baroness James of Holland Park. In 2008, she was inducted into the International Crime Writing Hall of Fame.

P.D. James was the author of twenty novels, fourteen of which featured her priggish and contemplative detective, Adam Dalgliesh.

1 Response to “The mistletoe murder, and other stories” by P.D. James – Book Review