Posted on December 30, 2016 by Fictionophile

A cold, cold, river.  An even colder, deserted, and unloved house.  It is here that Ada brings her six year-old daughter, Pepper.  The very first thing they do when they arrive is they take Pearl’s ashes to the river and scatter them among the current and the swirling leaves. Pearl was Ada’s mother.  Pepper had never met her grandmother because Ada has not been back to this house for thirteen years.  The rural isolation coupled with the dilapidated old house have a profound effect on Ada and Pepper – as it did to Pearl before them.

The house does not welcome them.  It is cold and damp.  There is a leaky roof, a blocked chimney, peeling paint, and no food in the cupboards.

Ada maintains that they are only going to stay until everything is ‘sorted’ and her mother’s house cleared out.  Ada is ‘in between’ jobs.  Pepper has decided that she likes it here.

Pepper is aptly named.  She is a prickly, precocious little girl who is prone to moodiness and volatility.  In the house, she

discovers many pictures that had been taken by her unknown grandmother.  Pictures of birds.  Then she finds her grandmother’s camera and tries to pick up where her grandmother left off – capturing the avian life near the river.  Only she doesn’t have any film…

Pearl too had at one time thought her life at the river house was temporary.  But life has a way of making you change your expectations – change your ‘plans’ without really realizing that this is what you have done.

Though dead, Pearl can be seen by Ada and Pepper.  Oh, and Captain the old cat.  Pearl is not a ‘ghost’ per se.  She is a presence.  An expected and accepted presence.  She belongs here. She has become one with the river.

Pearl sits on the riverbank with her feet in the cold, cold, brown river water.  Just as Pearl haunts the place where she has spent her last solitary years, so does “Weathering” haunt the reader. 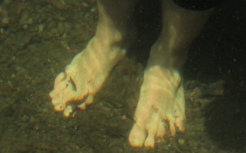 Ada gradually picks up the odd shift at the pub.  The locals like the food she prepares and her shifts increase.  Before she knows it, she is starting to feel like she might belong in this strange, lonely place – despite her best efforts at remaining ‘untangled’.

“Early morning, the sky tinged orange in the distance but grey as a sucked mint in the valley.”

The imagery in this novel is astounding.  I can vividly picture the aged Pearl, alone and forgotten, in her damp house, asleep on a kitchen chair covered by an old coat.

“Weathering” reminds us that solitary people, whether they are solitary through accident or design, can still be lonely.  It depicts how the incessant struggle that life sometimes presents us with is not without its rewards, be they hard to identify at first…

This is a novel which examines how miscommunication and loneliness can play upon the psyche.  How connection to a place can comfort through a sense of belonging.  How the examination of memories can assuage regret and rehabilitate souls.  A book of the elements.

The title “Weathering” is apt on two levels.  Pearl is weathered.  Worn away by time and circumstance. Ada and Pepper weather the changes in their lives and ride out the storm of Ada’s reluctant homecoming.  As a young woman she could hardly wait to leave this stifling, ramshackle, isolated house.  Now, back again, Ada finds herself unwittingly caring for it.

I think this novel spoke to me personally.  I too was an only child – brought up by a single mother.  The family dynamic was eerily similar (minus the ghost, LOL)

The weather, the cold, the damp, the dank chill, all play a huge part in this descriptive debut novel.  The damp is so palpable that I’m not unsure that I’m a bit mildewed.  For readers who dislike verbose description and more than a touch of the supernatural, I advise them to steer well clear.  Happily, I like both.  I found this novel of fatherless families to be a splendid and thoughtful debut equally rich in atmosphere and character.

“Weathering”  was  SHORTLISTED FOR THE BETTY TRASK PRIZE 2016

I received a digital copy of this debut novel from Bloomsbury USA via NetGalley in consideration of a review.

Lucy Wood is the author of a critically acclaimed collection of short stories based on Cornish folklore Diving Belles. She has been long-listed for the Dylan Thomas Prize, shortlisted for the Edge Hill Prize and was a runner-up in the BBC National Short Story Award. She has also been awarded the Holyer an Gof Award and a Somerset Maugham Award. Lucy Wood has a Master’s degree in creative writing from Exeter University. She lives in Devon.

Read an interview with Lucy Wood.