“A siege of bitterns” by Steve Burrows – Book Review

Expectations can make or break a read.  Sometimes when there is a lot of ‘hype’ about a book you set your expectations too high and then you find yourself a tad disappointed in it. Sometimes when you have NO expectations at all about a title, you find you LOVE it!  Such was my experience reading “A siege of bitterns“, the January read for my bookclub, Whodunit. 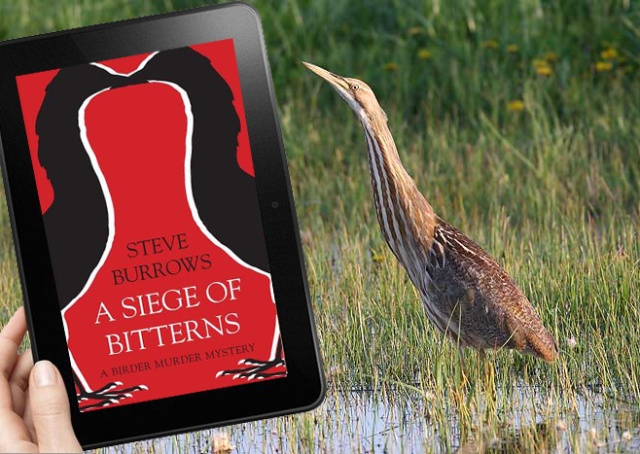 “A siege of bitterns” is a British police procedural mystery set in the marshlands of Norfolk, England.  The protagonist, Domenic Jejeune, is a reluctant police hero but an enthusiastic birdwatcher.  A Canadian, he works as a Detective Chief Inspector in Norfolk, England.  He and his journalist girlfriend Lindy, have recently moved to this area known for its natural beauty.

“Professional success seemed a high price to pay if it robbed you of the appreciation of nature’s gifts.”

Jejeune doesn’t care for his job and finds it particularly unfulfilling. He would much rather be out ‘birding’, than chasing down criminals. Just as he studies the minute movements of birds, so does he study humans.  He is a people watcher, an expert in watching body language and catching the unguarded facial expression. For someone so young, he is keenly perspective and an astute judge of human nature who always has an eye out for behavioral inconsistencies.

Jejeune’s second in command is Sergeant Danny Maik, a seasoned policeman, recently back from medical leave for heart problems.  He is an ‘old school’ copper.  Ex-military, and lacking in the university education of Domenic Jejeune.  The rest of Jejeune’s team include the young womanizer, Tony Holland, and the astute, middle-aged, female constable, Salter.

Jejeune seems an enigma to his team.  His reputation has preceded him.  They know he has had great success in his career despite his youth, but they don’t know what to make of his unconventional tactics.  The team, and Maik in particular gradually build a grudging respect for this interloper in their midst.  I loved reading of the growing relationship between Maik and Jejeune.

“Indeed Sergeant. A lot of birders headed in the same direction in a hurry. That usually only means one thing”.
“Anorak sale?”
If Jejeune was amused, he forgot to tell his face.

Jejeune and his team are called out to a murder.  A local celebrity, television presenter, and ardent environmentalist has been found hanging from a tree near his cottage. Cameron Brae’s celebrity and that of his pop star second wife, will ensure that this case will be under the utmost public scrutiny.

“As far as the public round here was concerned, opposing Cameron Brae was like kicking Bambi to death”.

No book has every so subtly reminded me of the oh so fragile environmental balance.  The author’s love of the natural world, and birding in particular, shines through his writing.

“That’s the beautiful thing about birding, my dear, it’s so remarkable inexpensive. The greatest show on earth, sun up to sun down, all for the cost of a pair of binoculars”.

The writing was beautiful.  The author sure knows the value of a well formed turn of phrase. His love of words is evident throughout the novel, and his penchant for collective nouns is belied by the titles of his novels.

“Domenic Jejeune drove without haste beneath a sky the colour of sorrow.”

I must admit, I would never have picked up this book to read if I went solely by the cover (as those who know me KNOW I do).  I think the cover is unattractive.  The content of the book however belies the cover.  This is a well-paced, well-plotted, police procedural mystery that should be enjoyed by all lovers of the genre.

There are two more books in this series that are currently available, and a third that will be published this year.  I have already purchased the second novel “A pitying of doves”.

The third and fourth titles in the series are “A cast of falcons” and “A shimmer of hummingbirds“.  All of these titles are prime examples of the author’s love of collective nouns.

Highly recommended to all who love a good police procedural mystery.

“A siege of bitterns” was published by Dundurn. I purchased a Kindle copy of this novel from Amazon.ca

Steve Burrows has pursued his birdwatching hobby on five continents, while researching articles on a wide range of environmental issues. He has a degree in English from York University and is a past editor of the Hong Kong Bird Watching Society Magazine. After travelling the world together, Steve and his family now live in Oshawa, Ontario.