“The girl in the garden” by Melanie Wallace – Book Review

Posted on February 18, 2017 by Fictionophile

June is a young mother, timid and painfully thin, with a small infant. She is abandoned by her partner at a seaside tourist cabin somewhere in New England.  Penniless, she is taken in by Mabel, the widow who owns the cabins.  This premise, and the beautiful book cover, are what led me to read “The girl in the garden”. 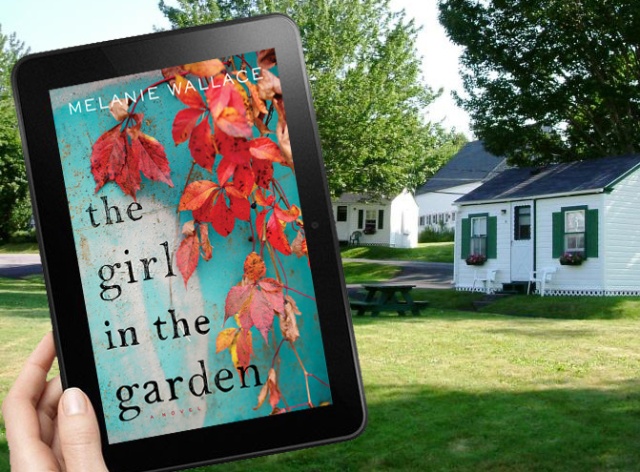 June is the daughter of ‘trailer-trash’.  She has never known parental love.  Now, age fifteen, she is a mother herself…  When the baby’s father abandons her penniless and alone – she is not surprised at her fate.

“And as she’d lived so much of her life in abandonment, she found desertion a normal state of being.”

Mabel married the love of her life. Now, still reeling from his recent death, she is sympathetic toward June.  She understands loss. Her heart breaks for the plight of June and baby Luke.

“…she knew a great deal about loss and knew that the sorrow it spawns is impervious to consolation, allows no solace”

When Mabel was newly widowed she felt cast adrift – wondering how she could go on… A neighbor, Roland, stepped in and helped her with the night shift at the cabins and any chores that she was unable to do herself.  Now, she doesn’t know how she would manage without him. He is a constant and steadfast ally.

Mabel and Iris are long-time friends.  In fact Mabel is Iris’s ONLY friend.  It is Iris’s choice. After the death of her husband, Iris became a recluse.  Her husband had been physically and emotionally abusive – a monster.  Iris has a daughter Claire.  Claire reminds Iris so much of her dead husband that she cannot abide the sight of her. She has arranged for her lawyer to act on Claire’s behalf.  She has a small cabin built in her garden where Claire is to live on her own – with NO contact from Iris.  In fact, Iris’s only contact with the world is Mabel and her lawyer, Duncan.

When the winter months come, Mabel knows that she cannot let June and baby Luke live in the cold, unheated cabins.  She turns to her friend Iris and, in return for a favor bestowed many years previously, Iris feels obliged to acquiesce to Mabel’s request.  So it is that June and baby Luke move into the cabin in the garden formerly occupied by Iris’s daughter, Claire.

Claire hasn’t lived there for years.  When she graduated from high school she took herself off to see the world through the lens of her camera.  Always more comfortable behind the lens, than any other way.

On the surface a reader might think Iris cold and unfeeling. However people always have their own reasons for behavior which is sometimes shocking and hard to understand.  Iris had a unique marriage that left her shamed and betrayed.  She felt the only way forward was to retreat from the world and her young daughter.

These and other characters in this powerfully written novel are all damaged in some way. In fact, one of my favorite characters in the novel I haven’t yet mentioned.  His name is Oldman.  A WWII veteran and a long confirmed bachelor, he is Duncan’s friend, he was once a friend to Claire, and now he befriends June and baby Luke.

“it’s never the scars which can be seen that matter”

Oh, and I’d be remiss not to mention Sam.  A Vietnam war veteran he accompanies Claire back to where she grew up.  He and Oldman form a deep, indescribable bond.

“before meeting Oldman his life hadn’t had much rhyme or reason to it and that he’d felt for  a long time that he was at its mercy, which hadn’t been very merciful.”

June, Mabel, Iris, Claire, Duncan, Oldman, and Sam. If “The girl in the garden” were a movie, it would be categorized as an ‘ensemble cast’.  The seven divergent protagonists were equally important in their own right, yet indelibly connected.

This novel was written in a very different style from what I am used to.  There was very little dialogue.  As I kept reading I realized that that was intentional.  All of the characters in this book were essentially solitary people.  So… it stands to reason that we get to hear their thoughts, not their conversation.  For one reason or another they are attempting to navigate life alone.  Despite the long sentences and rambling paragraphs, I found this very easy to read.  The words painted such vivid pictures, and the characters were so engaging that I feel I will miss them all now that I’ve finished the book.  They were all victims of circumstance – yet aren’t we all?

Two scenes that I don’t think I’ll ever forget.  Without giving too much away, I’ll say only that one involves a heroic dog, and the other describes a photograph of two men and two horses.  Truly a magical use of words!

Set during the 1970s, this is a novel about people helping people, “The girl in the garden” is a testament to the good in the world.  Sometimes, with all that is going on, we need reminding. It is also a novel about loss – loss that damages souls – and the souls attempt to heal… A novel peopled with survivors.

I will close this review with a similar scene to the ending of the novel (at which time I was completely verklempt). Literary fiction at its finest!

Many thanks to Houghton Mifflin Harcourt via NetGalley for providing me with a digital copy of this novel in consideration of my review.

,Melanie Wallace was born and raised in New Hampshire and now lives with her husband in Myloi, an agrarian village below the Ohi mountain range in Greece, and in Athens. Her novel The Housekeeper was longlisted for the Orange Prize for Fiction.