“The thing is” by Kathleen Gerard – Book Review

Posted on February 22, 2017 by Fictionophile

It is a fact that animals can help their owners overcome loneliness, depression, and anxiety. Their very presence instills in some a sense of calm – and they have been know to create a decrease in blood pressure. In The Thing Is by Kathleen Gerard, we are introduced to Prozac, a Yorkshire terrier who, like his namesake drug, helps his ‘people’ with his charm and personality.

This novel was written with alternating chapters featuring Meredith Macuso and the Yorkie, Prozac.  The first chapter opened my eyes to the fact that we were dealing with a sentient dog narrating his part in the story.  I could just about deal with that, as the chapters featuring Meredith were at times moving and at times humorous.  But when I got to the third chapter to find out that Prozac is a “Spirit Guide” who has a Mensa IQ, and has been reincarnated as different breeds of dogs throughout history…. well then my enthusiasm for the book waned.  He was Cleopatra’s dog, Queen Elizabeth’s dog, C.S. Lewis’s dog…. you get the picture. 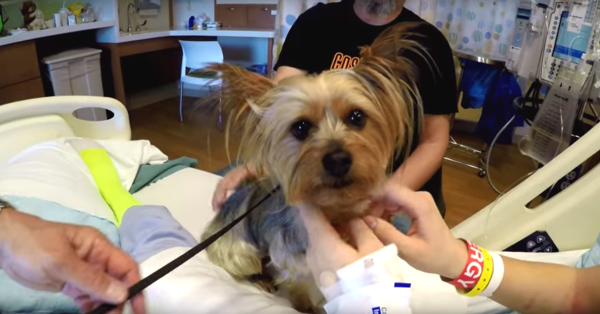 Meredith Macuso is very depressed and has withdrawn from the world since the death of her fiancé. She is a successful romance novelist, but finds it increasingly difficult to continue with her work because she is so overwhelmed with sadness.  Her sister Monica brings her a Yorkshire terrier one day.  The dog’s owner is a client of hers and has had to have surgery.  She foists Prozac on Meredith because she can’t look after him herself and she thinks the experience might be good for Meredith.

Meredith has never wanted a dog and this dog apparently requires certain activities. He is a therapy dog who visits an assisted living facility on a regular basis.  Meredith wants no part of this dog’s extracurricular activities, but gradually is drawn into a more active and social lifestyle than she was previously.

Meredith Mancuso is depressed. Ever since the death of her fiancé, she has shrunk from the world. Even with her successful writing career, she’s not motivated to work. When her sister, Monica, begs for a favor, Meredith wants nothing more than to say no. But she’s ultimately roped into pet-sitting an orphaned Yorkshire terrier named Prozac.

Blessed with spiritual wisdom and a high IQ, Prozac is an active pet therapy dog. To heal broken-hearted Meredith, he rallies his fan club at Evergreen Gardens, an independent living facility, where he visits each week.

Prozac and the community of resilient older folks challenged by losses of their own propel Meredith, often against her will, back into the land of the living. Meredith learns that most people carry some sort of burden, but it’s still possible to find meaning, purpose, and joy—and sometimes, even love—along the way.

After reading the blurb, I thought this novel would be a easy, fun, ‘chick-lit’ read.  A welcome change from my usual preferred diet of more serious fiction.  I read the words “blessed with spiritual wisdom and a high IQ” to mean the dog was smart and had the inherent loyalty and wisdom of most dogs. And I was correct to some extent.  It IS chick-lit – but the blurb did not warn me that it was equal parts chick-lit and fantasy!  Anyone who follows this blog will know that I don’t read fantasy as a rule.  I make the exception with the odd time travel novel, but for the most part I just can’t abide fantasy.

There were a few aspects of the book which I quite liked:

1) The whole ‘therapy dog’ aspect.  I love that dogs play an active role in the lives of the elderly and infirm who live in assisted living facilities.

2) The fact that the novel addresses the issue of how people who live alone can be drawn out from their solitude via caring for a pet.

If you enjoy stretching your imagination and don’t mind suspending belief, you will find this a enjoyable yet fanciful read. The Thing Is is an easy read that I’m sure many will find entertaining and fun – however, it was not at all to my taste.  I think the blurb was misleading and should have made the prospective reader more cognizant of the fact that this is a fantasy book. The romantic interest Meredith found at the end was predictable, but perhaps too saccharine for my liking.

I wish to thank Red Adept Publishing who granted my request for reviewing this novel via NetGalley. 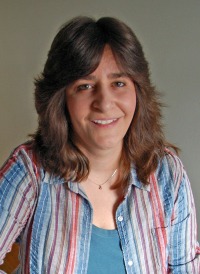 Kathleen Gerard is a writer whose work has been awarded The Perillo Prize, The Eric Hoffer Prose Award and nominated for Best New American Voices and Short Story America, all national prizes in literature. Kathleen writes across genres. Her short prose and poetry have been widely published in magazines, journals and anthologies. Her essays have been broadcast on National Public Radio (NPR).  Kathleen’s woman-in-jeopardy novel IN TRANSIT won The New York Book Festival - ”Best Romantic Fiction” (2011).

Kathleen is a book reviewer for and a contributor to Shelf Awareness and maintains the blog, “Reading Between the Lines.”

Fiction reviewer ; Goodreads librarian. Retired library cataloger - more time to read! Loves books, gardening, and red wine. I have been a reviewer member of NetGalley since October 2013. I review titles offered by Edelweiss, and participate in blog tours with TLC Book Tours.
View all posts by Fictionophile →
This entry was posted in Book Reviews, NetGalley and tagged chick lit, dogs, stand-alone novels. Bookmark the permalink.

12 Responses to “The thing is” by Kathleen Gerard – Book Review