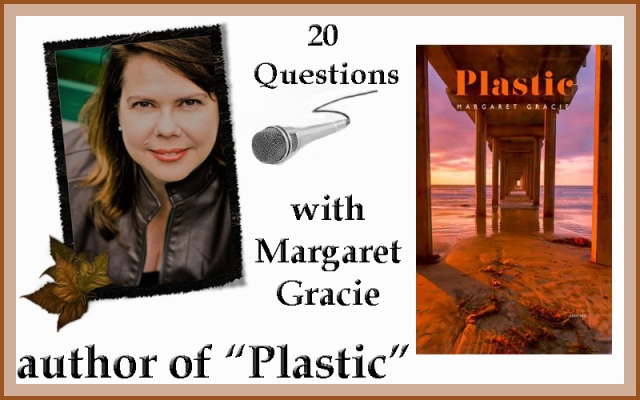 Today Fictionophile welcomes Canadian debut author Margaret Gracie.  Margaret has generously agreed to answer my questions and share her writing journey with us.

Margaret’s book has recently been published by The Porcupine’s Quill. 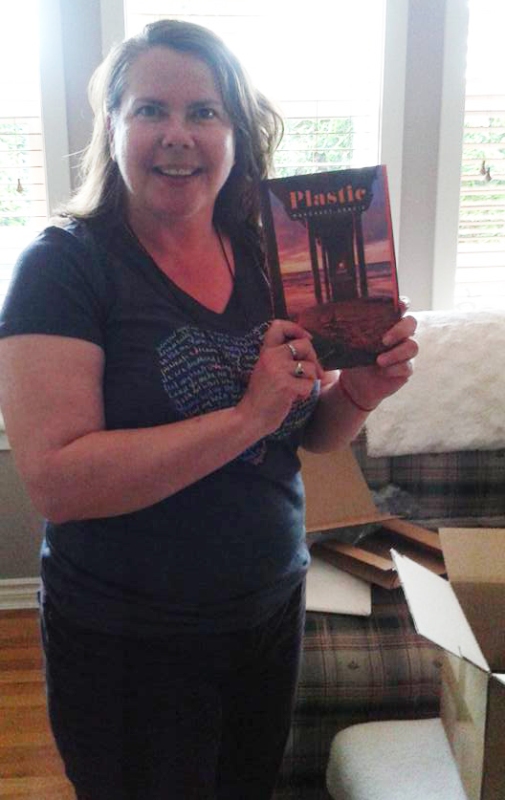 “Plastic” has arrived from the Publisher. Margaret is overjoyed to open the boxes containing her book!

F  Congratulations on the publication of “Plastic”! What do you think is the single most influential factor in your success as a debut author?

MG  Dedication. It is easy to begin writing. Halfway through, the challenges seem insurmountable. Pushing past those doubts and believing in the work, putting words on the page and seeing it through to the end is an almost Herculean task, only made possible through dedication.

F  How long did the writing process take?

MG  I wrote the first story in the book in 2008. At the time, I thought it was a standalone piece, but the other characters wanted to share their stories. Gradually, the individual stories formed a book. In total, I worked on it for eight years before finding a publisher.

F  How long did it take for you to find a publisher for your novel? Was it ever rejected before finally being published by Porcupine Quill?

MG  I spent about six months researching publishing companies before sending out a single query letter. I knew it had to be the right fit. I started sending out query letters in the spring of 2016 and the Porcupine’s Quill responded in early July. I had received a few rejection letters by then, but I think the research paid off. It isn’t uncommon to have dozens of rejections and perhaps never find a home for a book.

F  Did you have family and/or friends proof-read your book, or did you depend on Porcupine Quill’s editorial staff?

MG  I work as an editor so I was confident that the staff at the Porcupine Quill and I could handle the proofreading.

F  What part of your new career as an author do you dislike the most?

MG  At the moment, I dislike how little time I have for actual writing. I want people to discover and read Plastic, so I am investing time in the marketing of the book. But I do look forward to getting back to my writing schedule.

F  How important is place/setting in the linked stories of “Plastic“?

MG  The setting is very important. This is a book about the American Dream, and La Jolla/San Diego represent the epitome of that dream.

F  Do you identify in any way with your protagonist, Deborah Pearce?

MG  I identify with her struggles to have it all. I gave Debbie success in far more areas than I have had, which served to highlight where she was failing.

F  Your book presents several different person’s perspectives of the Deborah Pearce character. Do you think that people can really accurately understand another person, or is their judgment inherently flawed by their own experiences?

MG  One of my preoccupations when writing the book was image. With the advent of social media, we are all able to create a public face or persona. The difficulty arises when we start believing we are this person and try to live up to the always smiling persona we created. Those closest to us see a much different person. Yes, their judgment is clouded by their own experiences but they see beyond image to the person underneath.

F   You were born in Nova Scotia and now live in Victoria, British Columbia.  What made you decide to set your book in California?

MG  Although the themes are universal, this belief in achievement (or money) being a panacea resonates most in the United States. California is so beautiful and welcoming on the outside, like Debbie. But, as Keegan says, there are vermin teeming under every house.

F  Reviews, both good and bad, are part of the writing experience. How important do you think they are to the success of a book?

MG  Reviews introduce your book to people who may have never heard of it otherwise. I think they are crucial, especially if they touch on aspects of the book that might appeal to readers.

F  Writers are also avid readers. What type of book do you like to read for pleasure?

MG  I spent the last six years reading short stories and books of linked short stories. I absolutely loved Black Swan Green by David Mitchell and used it as inspiration for my book.

I generally read books about family dynamics and the complicated web of relationships. I also love to read books set in different countries so that I can learn about the place through the eyes of the characters.

F  If you could sit and enjoy a chat and a glass of wine with another author (living or dead) – who would it be? Why?

MG  Wow. Too many to list. It’s one of my greatest pleasures to sit with another author and discuss books or the craft of writing. I wish I’d had the chance to discuss short stories with Raymond Carver.

F  Are you working on another book?  If so, can you tell us a little about it.

MG  I am working on a novel. This one is set in Canada and centres around a family who fled certain death for a calm and happy life in this country. Things do not go as planned.

F  How much input did you have in choosing the cover for your book?

MG  Luckily, I was able to send the Porcupine Quill a few designs I liked for the cover. They chose one of the options and created a cover for my approval. I was very happy with the end product.

F  “Plastic” is your first book and you recently participated in your first ever ‘book launch.  Can you briefly share this experience with us?

MG  The book launch was such a wonderful evening. So many people came out to share in my success. It was the closest thing to a “love-in” I may ever experience. After so many years working on the book, I had the chance to celebrate its culmination. That rarely happens in writing, which made me appreciate it all the more. 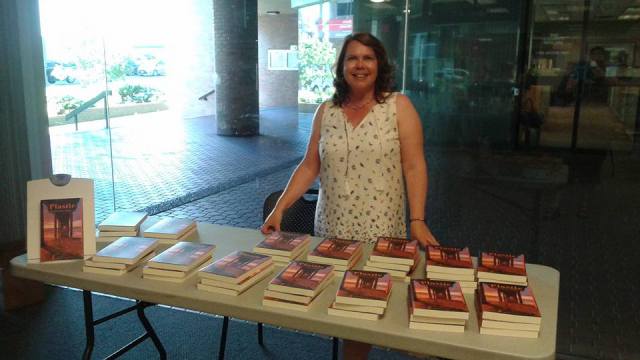 Margaret Gracie at her first ever book launch on June 22, 2017 which was held at the Victoria Central Library

F  Are there some books that you find yourself recommending to all your friends?  Tell us two titles that you recommend.

MG  I loved Fugitive Pieces by Anne Michaels. I cannot say enough good things about it. It is beautifully written, evocative and powerful.

I also recommend The Book Thief to everyone. I would happily reread it to visit those characters again. I loved Marcus Zusak’s narrative device. A true gem.

F  What current novelist do you feel is underrated or deserves to be more well known?

MG  Having spent so many years reading short stories, I have to say that the entire cannon of short story writers deserves more recognition. Writers like Deborah Willis, Peter Orner and Nam Le, to name a few. Check them out!

MG  I went down to the San Diego area for five or six years in a row to people-watch. Once I decided on the setting and the characters, I needed to have a good feel for how they would stand, speak and interact.

The four main characters’ names arrived with them. The minute I wrote the first story, they were Debbie, Greg, Keegan and Tiff. I could never see them as anything else. For other characters, I might go through a process of elimination. I try names to see if they fit. As I learn more about them, it becomes clear what their names are.

F  What interview question have you never been asked that you wish had been asked? What’s the answer?

MG  I’m new to answering interview questions and find them all interesting. No one has asked me yet what I hope for the future. My ideal is for people to read and enjoy ‘Plastic’ and for me to keep writing and publishing my work. I feel that I have a lot more to say and explore in my writing.

Thanks SO much Margaret for taking the time to answer my questions so graciously.

The blurb of “Plastic” from Goodreads:

Deborah Pearce has it all. The former Miss America lives an enviable life in La Jolla, California, with a modelling career, a doting husband, two kids and all the fashionable clothing money can buy.

Somehow, it isn’t enough. Image-obsessed Debbie is plagued by dissatisfaction, anxiety and an unquenchable desire for admiration. Her once-promising career is stagnant, the value of her brand diminishing with every passing day. Her two children, neither beautiful nor charming, become petulant and resentful in the face of her ill-concealed disappointment, acting out in ways that have far-reaching consequences for the entire family. But Debbie refuses to let that stop her from striving toward the life she craves … until one day her seemingly perfect world pulls her under, threatening to drown her in disappointed hopes.

Told from the perspectives of eleven interconnected characters, Plastic is a story of loneliness and longing, of alienation and acceptance, and of the never-ending pursuit of the American Dream. 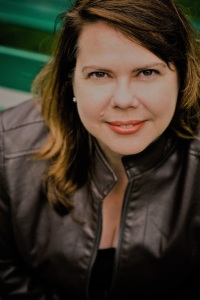 Margaret Gracie grew up in Halifax, Nova Scotia and graduated with a Philosophy degree from Dalhousie University. She lived and worked in Germany and Quebec before settling on the West Coast of Canada. She now lives in Victoria, British Columbia and works as an editor for the federal government. This is Margaret’s first published book. She is currently working on a novel.

Fiction reviewer ; Goodreads librarian. Retired library cataloger - more time to read! Loves books, gardening, and red wine. I have been a reviewer member of NetGalley since October 2013. I review titles offered by Edelweiss, and participate in blog tours with TLC Book Tours.
View all posts by Fictionophile →
This entry was posted in author interviews, Authors, Canadian fiction, Short stories and tagged authors. Bookmark the permalink.