Renee at It’s Book Talk began this meme as a way to share old favourites, as well as books that were published over a year ago. Not to mention those that are languishing on the to be read pile for whatever reason.

This week I’ve chosen “Lacey’s House” by Joanne Graham for my Throwback Thursday post. It was published by Legend Press in May 2013 and was, for me, a 5* read. 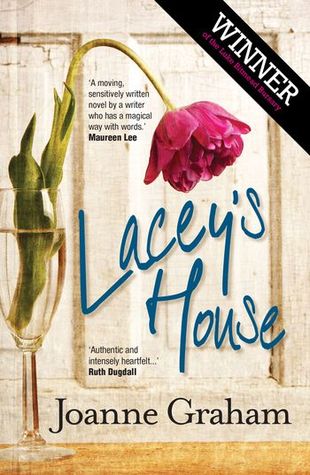 Originally reviewed on Fictionophile on July 14, 2014

A beautifully written, well crafted, debut “Lacey’s house” is a novel told in two voices.  Alternate chapters introduce us to Rachel — a young, single, and solitary artist who has just miscarried — and Lacey, an elderly women with a horrific past who is shunned socially.   The chapters delve into their characters allowing the reader to know them gradually, much like peeling the many layers of an onion, one by one…

When Rachel suffers a miscarriage, she feels that she is ready for a complete change in her life.  Thus, she moves from the bustling city of Birmingham, to rural Devon.  She rents a cottage at the furthest end of a small village, and just over the hedge from Lacey Carmichael.   Before Rachel rented the cottage it belonged to Albert, an elderly widower who was Lacey’s one and only friend.  When Albert passed away, Lacey was under suspicion for his death, partly due to the fact that she found his body, and partly due to the fact that she was viewed as eccentric and was a social outcast.  Even after the police proved via forensic evidence that Lacey had nothing to do with his death, the village people still harbored doubts of her innocence.

Over time, Rachel and Lacey become true friends.  Their friendship is based on mutual respect, understanding of loss, and a shared joy in the simple magic that can be found in life.  Loneliness is not a stranger to either of the women and when their friendship blooms it is a much needed panacea to their solitary lives.  Over time they share their life stories with each other.  Something neither has every done before…  They begin to trust at a time when the concept of trust seemed impossible.  Their stories are both tragic ones, with Lacey’s story being both tragic and appalling.

The novel is not a mystery novel, yet the reader realizes early on that there is a mystery contained within it.  Not a murder mystery, but one of curiosity as to what really happened in Lacey’s early life.  That might sound dull to some, but nothing could be further from the truth.  The pages almost turned themselves.  The pace of the narrative was faultless.   “Lacey’s house” was one of those novels that made me as a reader grateful for having had the opportunity to read it.  I loved both characters equally and felt bereft when the last page was turned.

Joanne Graham based the novel on the life of her grandmother.  You can read an interview with her here.

Renee at Its Book Talk

Cathy at Between the Lines

Sam at Clues and Reviews

Holly at Dressed to Read