Posted on September 21, 2017 by Fictionophile 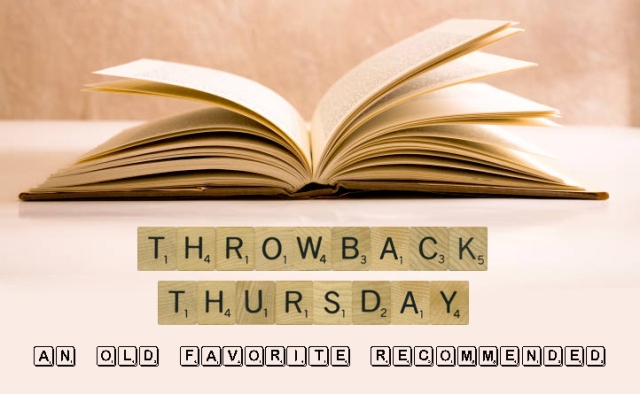 Renee at It’s Book Talk began this meme as a way to share old favorites.

This week I’ve chosen “The black house” by Peter May for my Throwback Thursday post. It was first published in 2009 and was, for me, a 5* read.

First reviewed on Fictionophile on July 31, 2014

They say that reading is the cheapest form of travel.  In this case it was a wonderful trip.   “The Blackhouse” by Peter May is the first in a trilogy of novels set on the Hebridean Isle of Lewis. The setting was a major factor in the story and the author’s skillful writing transports the reader to Lewis with it’s rich culture and long history.

However, let us not forget that this is a murder mystery. The protagonist, Fin Macleod was born and brought up on Lewis. He is now a policeman working out of Edinburgh. Fin is very vulnerable as he is in mourning for his broken marriage and for his young son who perished in a hit-and-run.  When a murder occurs on Lewis that resembles one that he is working on – his superiors send him to Lewis to aid in the investigation.  Fin has not been back to the island since he left it eighteen years ago to attend university.  It turns out that the murder victim, Angel Macritchie, was a childhood nemesis of Fin, a bully who played a large part in his growing up. His return to the Isle reacquaints him with Artair, his best friend from childhood and also Marsaili Macdonald, his first love.

The story is told alternating between the present with the murder investigation – and the past which slowly reveals the trauma and tragedy filled childhood days of Fin.  Memories of starting school, the accidental death of his parents, and his boyhood friendships. Memories of the year he was chosen to take part in the annual guga hunt which is a long tradition on Lewis. The hunt for the gugas is perceived on Lewis as a rite of passage that turns boys into men.  In Fin’s case it was marred by tragedy.

The adult, present-day Fin uses his memories and his return to Lewis as a way of facing the demons of his past. The novel does the mystery genre justice, but it is much more than a mystery novel. It is a character-driven study in human nature, an examination of how our pasts can shape our lives.

The characterizations were expertly formed, with each character fully fleshed-out and multi-dimensional. The atmospheric setting was described in such a way as to actually affect the reader’s senses. You can smell the sea and feel the wind… 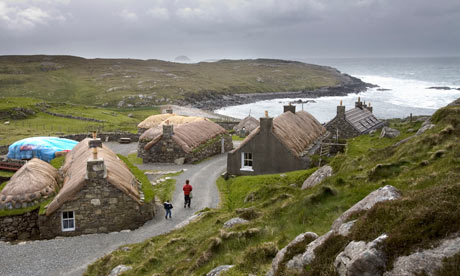 A scene from the Isle of Lewis

The author has spent several years on Lewis and his personal knowledge shows in the writing.

The Blackhouse is the deserving winner of several literary awards and is – according to the author the best book he has ever written. It was rejected by many publishers at first, but is now a world-wide bestseller with translations in many languages.  It is one of the best written novels I have ever had the pleasure to read.  Highly recommended! 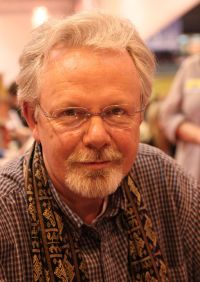 Peter May was born and raised in Scotland. He was an award-winning journalist at the age of twenty-one and a published novelist at twenty-six. When his first book was adapted as a major drama series for the BBC, he quit journalism and during the high-octane 15 years that followed, became one of Scotland’s most successful television dramatists. He created three prime-time TV drama series, presided over two of the highest-rated serials in his homeland as script editor and producer, and worked on more than 1,000 episodes of ratings-topping drama before deciding to leave television to return to his first love, writing novels.

He has won several literature awards in France and received the USA’s Barry Award for The Blackhouse, the first in his internationally bestselling Lewis Trilogy.

He now lives in South-West France with his wife, writer Janice Hally.