Suzanne and Eddie Deacon aren’t getting any younger. They have been very content in “The Sugar House”, their comfortable, renovated house in mid Wales. However, they have decided that the time to downsize, and move on, has come. They find that winters in their remote home are long, and they miss their children and grandchildren. They make the decision to move back to England to be closer to their family.

“Somehow, they must be made to pay.
This was her future they were tossing out like a bundle of rags.”

Ruth, their neighbour, is distraught at their decision to relocate.  She is quite close to the couple and occasionally house-sits and dog sits for them when they travel. She had assumed that they would come to depend on her more and more as the years passed. Being fifteen years their junior, she wanted to act as their caretaker and move in to the Sugar House.  A house she covets. Shortly after  she learns of their decision to move, she hatches several devious plans to thwart the sale of house, thus making their move impossible.  For instance, she enlists the help of a neighbouring farmer to block the driveway so that prospective buyers cannot enter the lane.

At first we think it is just a lonely woman resorting to drastic measures to ensure company and a way to be needed. Then, we learn that she has history of such behavior and that she once went by a different name… She is clearly unstable – but to what lengths will she go?

“The more she contemplated Suzanne and Eddie’s casual disregard of her feelings, the fiercer her indignation stung.”

The story moves forward, with an increasing sense of menace, when Ruth is entrusted to look after the Sugar House when Suzanne and Eddie go away. Ruth’s character seems more and more creepy as she dons disguises and different personas to manipulate events to her own agenda.

Meanwhile, Bethan Harley, the estate agent, wonders what, or who, is behind the events that are sabotaging the sale of The Sugar House.  It is a gem of a property and is generating a lot of interest. Every time she schedules a viewing by prospective buyers – something goes awry. One interested party, Ray Kirby, is undaunted by the odd events that seem to be plaguing Bethan. Eventually an unlikely romance blossoms between Bethan and Ray as together they try to discover who is behind the sabotage and prevent the cunning, guilty party from proceeding further.

“Luxury. Security. Companionship. Control.
All these things were seductive. Addictive.”

Ruth continues with her cunning plans. She is revealed to be a very lonely and delusional woman. Orphaned at a young age, and without any support system, she has built herself a fantasy world. Even though we begin to understand Ruth – she remains an unsympathetic character.

I found the cover of this novel to be very misleading. It makes you think it might be a ghost story or have other paranormal features.  Nothing could be further from the truth. This novel was part ‘cozy’ mystery, part chaste romantic suspense. It was a ‘light’ enjoyable read. The premise held a lot of promise, but the weak ending let down the rest of the book. All in all, not great, but an okay read…

I gratefully received a digital copy of this novel from Crooked Cat Publishers via NetGalley. I was only too happy to provide this honest review. 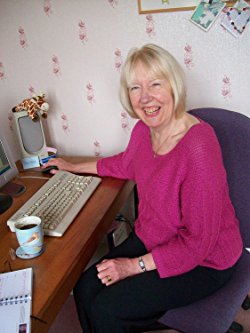 Jill Barry was born in a Welsh seaside town from which she has taken her pseudonym. Jill used her secretarial skills as a springboard to jobs in the hotel and leisure industry, including stints as airline receptionist and air stewardess.

After marrying, she settled in Wiltshire where she and her late husband bought a former Victorian school and ran a guesthouse. Her first writing success was a ghost story broadcast on local radio. After moving to Mid Wales in the year 2000, she applied to study for a degree in Creative Writing.

Jill writes contemporary and historical romance novels and occasional short stories and has one psychological suspense novel “The house sitter”. She runs on line creative writing workshops for students at a virtual high school and enjoys giving library talks.

4 Responses to “The house sitter” by Jill Barry – Book Review