Posted on November 4, 2017 by Fictionophile

Blurb: Amid the terror the Blitz in the Second World War, seventeen-year-old Eliza and her troubled little sister Rebecca have had their share of tragedy, losing their mother to German bombs and their father to suicide. But when they are forced to leave London to work for the mysterious Mr. Bronawell at Abigale Hall, they find the worst is yet to come.

Eliza, 17, and Rebecca, 12 have had a traumatic life. Sent out of London as war evacuees during the Blitz, they returned to the city as orphans. They are taken in by their Aunt Bess, but their life is hard. In serious debt, Bess sends them to Carmarthenshire, Wales to work at a gloomy Welsh manorhouse named Thornecroft. I liked Eliza so much at first. She is given only a short time to pack for her journey to Wales and laments the fact that she cannot bring her beloved books along with her.

They are put to work by the housekeeper, the evil Mrs. Pollard. Their host, the ill and illusive Mr. Brownawell, is seldom seen.  The only other living beings on the vast estate are the one-armed groundskeeper, Mr Drewry and his howling wolfhound, Kasey.

Thornecroft has no electricity, so Eliza is expected to do her work with the aid of a Tilley lamp. The manor is dark, dusty, dirty, mouldy, disused, and creepy. The only place that seems at all light and peaceful is the glass-domed circular foyer called Abigale Hall.

“Abigale Hall was her favourite place, the only spot that felt untouched by the evil eroding the rest of the manor.” 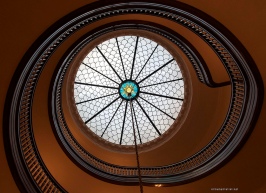 “Ever since they arrived at the manor, Rebecca seemed to be slipping into her old ways, everything the hospital fixed breaking once again.”

In their first few days at Thornecroft, Eliza’s younger sister Rebecca behaves oddly. Deeply traumatized and already suffering from some mental health issues, Rebecca has taken to carrying a dead mouse around in her pocket which she strokes continuously… Then she finds an old bisque doll with the eyes gouged out…

“The world was wicked and cruel”

When Eliza is instructed to clean the library, she cannot believe her luck. Finally she will be able to see some books, perhaps even borrow one.  To her utter dismay and bitter disappointment, the shelves are barren. Would this horrible place allow her no comfort at all? She was unable to contact her boyfriend Peter before being whisked off to Wales, so he has no idea where she is… Her sister is behaving erratically, and she begins to see what she believes is the ghost of Victoria, one of the house’s former occupants.

Meanwhile, Peter, back in London, tries to find Eliza’s whereabouts. He suffers many trials and more than a little danger in his pursuits.

As for Eliza and Rebecca?  Well, it turns out that they had many predecessors at Thornecroft, all of whom seem to have gone missing… Eliza is plagued with terrifying nightmares.

This novel had many good points. The description of the post-war shortages and rationing was well done. The setting was equally well described. The characters were fully-fleshed out. It was the plot development that let it down for me.

I began reading this book on Halloween, as I was in the mood for a dark, gothic novel. Well… I got the dark, and the gothic, but unfortunately I didn’t get a read that I can, in all honesty, recommend – this was very disappointing as the beginning of the book held so much promise. The title was misleading as the manor was not called ‘Abilgale Hall’, it was called Thorncroft. The intriguing premise, and atmospheric setting, were more than offset by the dark, dour, and dismal story. At about 65% through the novel, I was hoping for a miracle, but sadly, I didn’t get one. The plot plodded along interminably. The ending was disturbing and felt rushed. A bleak gothic horror novel, I was surprised to read that it won the Faber and Faber Creative Writing MA Prize.

I received a digital copy of this novel via Edelweiss and Skyhorse Publishing in expectation of my honest review.

Lauren A. Forry was brought up in the woods of Bucks County, Pennsylvania where her FBI agent father and book-loving mother raised her on a diet of The X-Files and RL Stine. After earning her BA in Cinema Studies from New York University, she spent some time in film production before moving to London where she earned her MFA in Creative Writing from Kingston University. There she was awarded the Faber and Faber Creative Writing MA Prize for her first horror novel, ABIGALE HALL (Black & White Publishing, February 2016). Her short stories have since been published by Brick Moon Fiction, Lamplight Magazine, and in multiple sci-fi and horror anthologies. She currently resides in the woods but can, on occasion, be found in the quieter parts of London.

3 Responses to “Abigale Hall” by Lauren A. Forry – Book Review