Posted on November 14, 2017 by Fictionophile 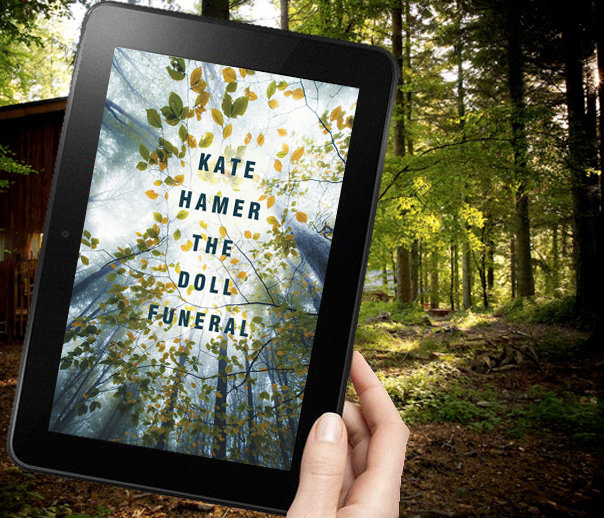 A well-written, though at times bleak novel, about a thirteen year-old girl who can ‘see‘ the dead. She sees many dead people, but the most constant presence is that of ‘Shadow’, a young boy who has made himself known to her throughout her life.

Ruby lives in The Forest of Dean with her parents Barbara and Mick. Her life is traumatic. Mick is a vicious and violent abuser who thinks nothing of slamming Ruby up against a wall, or making a meal of her face with his fists. Barbara seems to love her, but will not stand up to Mick’s violence.  Ruby misses a lot of school due to her injuries. Mick is the school caretaker and doesn’t want her to show up bruised at his place of work.

On her thirteenth birthday, Barbara and Mick tell Ruby that she is adopted.  Rather than being upset by this revelation, she is ecstatic.  It explains so much.  What a relief! She now devotes herself to finding her ‘real‘ parents. 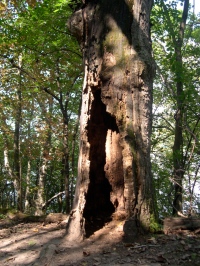 Ruby has a large red birthmark on one side of her face. She is ostracized at school, partly because she is ‘different’ and partly because of her home situation.  One day, when fear of Mick’s violence overcomes her, Ruby bashes him in the head with a plank.  Thinking that she has killed him, she runs away to her beloved forest. She spends the night in a hollowed out tree. Upon her return to the house, she is packed off to live with Mick’s sister in Coventry – away from the forest.  With some guidance from ‘Shadow’, Ruby runs away again – this time to the home of Tom, a fifteen year-old boy she met near her school.

“We are what our families have made us. But sometimes you can escape that.” 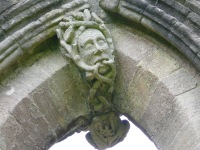 As Ruby passes under the arch with the ‘Green Man‘, she enters Hilltops, a large house where the squalor makes the living conditions much worse than the place she left.  Tom, his older sister Elizabeth, and his younger brother, Crispin live alone in a large house, which was once a commune. Their neglectful, ‘hippie’ parents have absconded for pastures new. Now the adolescent children run wild, in increasingly desperate conditions. Malnourished and cold, they resort to killing wildlife for sustenance.

The story shifts point of view from Ruby in 1983 back to Ruby’s birthmother Anna in 1970. Anna got pregnant at eighteen. She was unmarried, a difficult position for a young girl in 1970. She eventually marries Ruby’s criminal father Lewis, but soon after the marriage she suffers from a psychotic episode that the psychiatrists label as postpartum psychosis.

“Family has been one long disappointment”.

I love the way that Kate Hamer writes. Her sentences flow easily and she has a way of capturing emotions and scenes that resonate with the reader.  That being said, there were times while reading this novel that I thought I was having a psychotic break.  Fanciful by turns, I wasn’t sure at times what was real and what was purely in Anna’s or Ruby’s imagination. The classic novel “Alice in Wonderland” was mentioned several times in the book, and there were times that I felt as though I had fallen down a magical rabbit hole while reading it.

I purchased the prequel novella “The world of Shadow” and read it prior to reading “The doll funeral“. The novella introduces the reader to ‘Shadow’, the little dead boy that accompanies Ruby through her life.  I was thinking it would help me get a better grip on the book, but now I wish I had read it after the book…

I’m on the fence about recommending this novel.  It does contain beautiful prose and has an atmospheric setting. The story is at once heart-breaking and fantastical. I read the author’s “Girl in the red coat” previous to this and I enjoyed that book more than this one. Although I went with it at first, I think the supernatural aspect of the story just got to be too much for me.  Themes of parental neglect, betrayal, and of course – the spirits of dead family abound. Recommended with some reservations…

The publisher Faber & Faber granted my wish to read this novel via NetGalley. I was only to happy to provide my unbiased review. 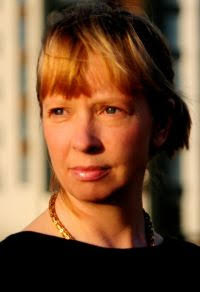 Kate Hamer grew up in the West Country and Wales. She studied art and worked for a number of years in television and radio. In 2011 she won the Rhys Davies Short Story Prize and her short stories have appeared in many collections. Her novel THE GIRL IN THE RED COAT was published in the UK by Faber & Faber, in the US by Melville House and has been translated into 17 different languages. It was shortlisted for The Costa First Novel Prize, the British Book Industry Awards Debut Fiction Book of the Year, The John Creasy (New Blood) Dagger and the Wales Book of the Year. It was a Sunday Times bestseller. Her new novel THE DOLL FUNERAL has been a Radio4 Open Book editor’s pick and a Bookseller Book of the Month.

9 Responses to “The doll funeral” by Kate Hamer – Book Review