Posted on February 27, 2018 by Fictionophile

The novel opens with: “Another year, and I still don’t like old people. Their walker shuffle, their unreasonable impatience, their endless complaints, their tea and cookies, their bellyaching.  Me? I am eighty-three years old.” 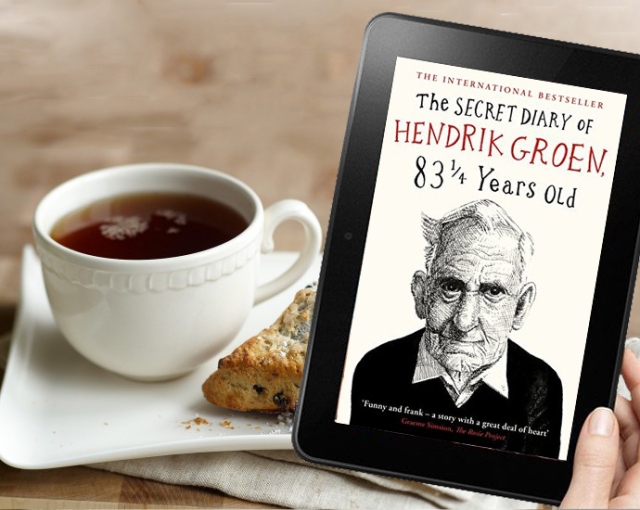 Considering that the basis of this novel is the observations of an elderly man who resides in an Amsterdam nursing home, I should be a bit guilty for chuckling through most of it. I did this so much that my husband thinks that I have ‘lost the plot’.

Hilarity via truisms! In other words? A dramady.

The book, written in the form of a diary, holds acutely astute observations on what it is to be ‘old’. Rendered in a direct and simple way, without artifice, the book just works.

Hendrik, at 83 years old, is one of the youngest residents of his nursing home.  He definitely has all his wits about him, though he admits to a failing memory, but that could be true of a lot of us. Along with his wits, he has a sometimes scathing, always intelligent sense of humor.

“Of the five senses, my nose still works best. Which is not always a blessing in here. It smells of old people.”

To make the days less monotonous, and to make something of what life they have left, Hendrik and a few of his friends set up the ‘old-but-not-dead club’ aka ‘The Rebel Club’. Hendrik’s life has been a tragic one, yet, for the most part, he approaches what life he has remaining with good humour. All the more poignant because Hendrik NEVER has any visitors. His only friends live in the nursing home with him.

“Friendship is the essential ingredient for a good life.”

Hendrik’s friends in the club are all folks that I would like to meet. Especially Eefje Brand, the woman he learns to love. She brings banter and true affection back into his life – at least for a short while…

Even though Hendrik’s observations are of a Dutch care home, they are in many ways universal. People are people, wherever they live.  Nursing home issues, whether they be as mundane as the daily monotony, as base as the financial cutbacks, or as dismal as the prevalence of depression among the elderly, all resonate with elder folk everywhere.

“The older the people are, the more scared they are. At our age, surely, there’s nothing left to lose, so why not be fearless?”

Because Hendrik finds walking more and more difficult, he invests in a mobility scooter. This gives him great pleasure and a sense of freedom he had forgotten.

This is a book that resonates with me personally.  I spend a good two afternoons a week visiting my stepfather who is in just such a nursing home. I must confess I wish he were a little more like Hendrik…  Sadly, his wits are not always about him…

“Something exciting to look forward to is crucial to keep up one’s zest for life.”

I enjoyed the descriptions of Amsterdam, and I loved the tales of the excursions enjoyed by “The old but not dead” club.

I can only hope that I can age with as much dignity and panache as Hendrik.

The Secret Diary of Hendrik Groen, 83 1⁄4 Years Old has been translated into over twenty languages. And… good news folks!  There is a sequel to Hendrik’s story! “On the bright side” is now available for your reading pleasure.

I received a digital copy of this novel for free – at my request – from Grand Central Publishing via NetGalley. This review is my way of saying thanks for a great read.

The book has been adapted for the small screen in the Netherlands.  I thought you’d appreciate seeing a still from the show featuring Kees Hulst, the Dutch actor who plays Hendrik Groen.

For years it was unknown who was hiding behind the pseudonym. Hendrik Groen started his diary on the literary website of Torpedo magazine. He says about his novel: “There’s not one sentence that’s a lie, but not every word is true.”

The secret diary of Hendrik Groen, 83¼ years won the Audience Award for the Dutch Book in 2016. This prize was not personally collected by the author.