“The last resort: a short story” by Rajib Mukherjee

Posted on February 28, 2018 by Fictionophile

“When you have the one thing that could revive a bereaved man in distress, compassion becomes second nature. But what if your empathy puts the love of your life at stake?” 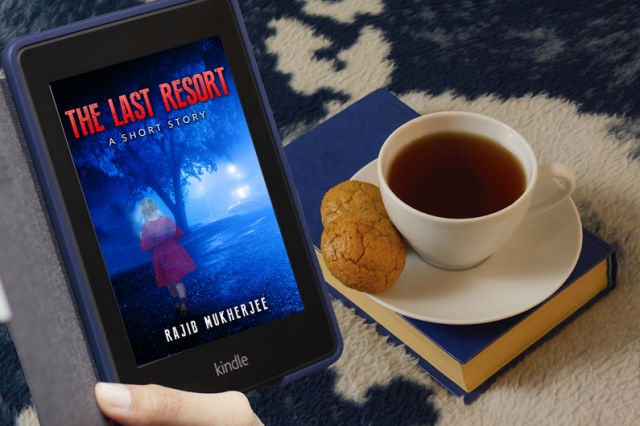 The blurb and intriguing cover are what first attracted me to this short story.

Our protagonist is riding home from work on pubic transport somewhere in New Jersey. He is scanning the videos he took of his girlfriend Ana, the love of his life. A stranger seems inordinately interested in his videos. He explains that Ana is the spitting image of his sister, who was killed in a car accident the previous year. He wonders if our protagonist would share his photos as he doesn’t have anything to remember his sister by. Feeling sorry for the man, he complies.  When he visits the man in his home, he comes to realize that the niece the man spoke of is just an hallucination – the girl died in the accident with her mother…

“What had started out as a gesture of goodwill was turning into a fool’s errand for my stupidity.”

So far, this story has all the makings of a thriller, but alas, this is not the case.  Told in two parts, with the second part occurring several years later when our protagonist is now happily married to his love Ana, and the father of a little girl.

They meet up again with the man who is going to be put into an institution for his psychosis.  Altruistically they believe that they can ‘cure’ him if they banish his guilt over the accident. They plan a deception that will hopefully alleviate his guilt and make him come to terms with his loss.

This story just didn’t do anything for me. The writing didn’t have a good flow. The potential was there, it just didn’t evolve.  There was a plot twist, but by that point, I was no longer invested in the outcome. It just seemed pointless… The protagonists seemed to be naive and more involved in the man’s life than the situation seemed to warrant.  Perhaps another reader would get more out of this read than I did, but for me it was a resounding disappointment.

This story was a ‘Read Now’ offering by BooksGoSocial via NetGalley.  As always, my honest review reflects my own personal reaction to what I have read.

Rajib Mukherjee is a solution architect in the IT world. He lives in a small town in Georgia with his wife and five-year-old son. He was born in Kolkata (Eastern India), grew up in Hyderabad (Southern India), and married a Manipuri girl (North-Eastern India). As a result, he can speak four languages. Find him online at rajibmk.com and sign up for his newsletter. Also, follow him at his Amazon author page.

Fiction reviewer ; Goodreads librarian. Retired library cataloger - more time to read! Loves books, gardening, and red wine. I have been a reviewer member of NetGalley since October 2013. I review titles offered by Edelweiss, and participate in blog tours with TLC Book Tours.
View all posts by Fictionophile →
This entry was posted in Book Reviews, NetGalley, Short stories. Bookmark the permalink.

4 Responses to “The last resort: a short story” by Rajib Mukherjee