“Death at Whitewater Church” marks my first time reading the work of Andrea Carter and my 6th title for “Reading Ireland Month“. 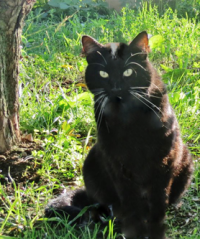 This mystery, a first in a new series set in Inishowen, is a well wrought novel with likeable characters.  The protagonist is Ben O’Keeffe a country solicitor.  Her law practice is the most northerly solicitors’s office in Ireland. ‘Ben’ is short for Benedicta, though that is not her real name…  She has been in this small rural community for the past six years following a family tragedy.  Here she has made friends. Leah, her secretary/office manager, Maeve her best friend who works as a veterinarian, Phyllis, who runs the bookshop, and of course Tom Molloy.  Ben lives just out of town in a cottage which she shares with her black tomcat whose name, fittingly, is Guinness.  The reader is made aware that before she came to this small place, she worked in a large law firm in Dublin – and that she suffered a personal

tragedy, and that now she is somewhat estranged from her parents.

“Guilt is a hard thing to live with, Ben. It can eat away at you like a cancer if you bury it.”

Ben accompanies a land surveyor as he measures the property of Whitewater Church. The church had been deconsecrated and an English couple want to buy it and renovate it into a dwelling. While there, they discover a crypt – complete with the skeletonized remains of a man.

Six years previously a local man had gone missing on the day of his wedding.  Everyone assumes that the remains found in the crypt are of him, Conor Devitt.

The Devitt family were not strangers to loss. Many years before, the father committed suicide after a cargo ship was bombed by the IRA.  Now, just days after the crypt remains are found, another Devitt brother is found dead after a traffic accident. Coincidence? Then it is determined that the remains are NOT those of Conor Devitt!  Who could it be? Is Conor still alive?

This is a mystery with themes of betrayal and guilt – written in a believable way, with well rendered prose.  The author is a solicitor herself, so that part of the narrative is knowledgeable and convincing. Not gritty by any means, yet somehow more serious than a ‘cozy’. The dash of romantic tension between Ben and policeman/Guard Tom Molloy only slightly impacted the story, but in a good way. I can see how Ben’s ‘nosiness‘ coupled with her line of work and her romantic interest in the town’s policeman will engender many more interesting stories for this series.  It is a series I intend to follow when time permits. Recommended. ♣

I received a complimentary digital copy of this novel from Oceanview Publishing via Edelweiss – at my request, for my own reading enjoyment and the writing of this review.

Andrea Carter graduated in law from Trinity College, Dublin. She qualified as a solicitor and moved to the Inishowen Peninsula in Co. Donegal where she lived and worked for a number of years. In 2005 she transferred to the Bar and moved to Dublin to practise as a barrister. She grew up in Ballyfin, Co. Laois.

Fiction reviewer ; Goodreads librarian. Retired library cataloger - more time to read! Loves books, gardening, and red wine. I have been a reviewer member of NetGalley since October 2013. I review titles offered by Edelweiss, and participate in blog tours with TLC Book Tours.
View all posts by Fictionophile →
This entry was posted in 1st in series, Book Reviews, Edelweiss, Mystery fiction and tagged Ireland, mystery fiction, recommended reading. Bookmark the permalink.