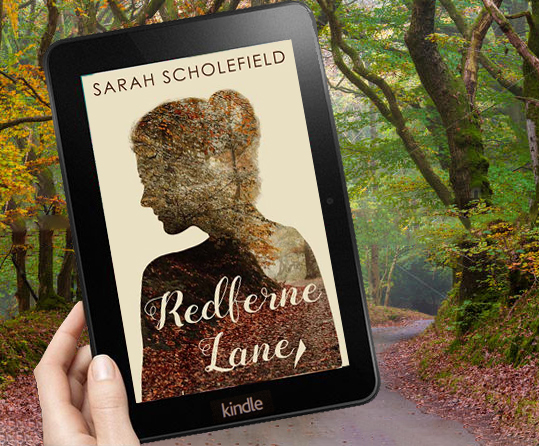 Living on an idyllic lane in Somerset, Grace Redferne’s life is anything but idyllic. A young widow, Grace lost her husband Ezra when he was only thirty years old.  His fatal bicycle accident was two years ago now, and Grace is NOT coping with her loss.

She is deeply despondent and is increasingly reliant on a cocktail of booze and prescription medication to get her through her days.  She is only barely hanging on to her job after showing up late and hungover more often than not.

Then, Torin, Ezra’s older brother comes to stay at Redferne House which is just up the lane. Grace and Torin have history. It was he who she fell in love with first – though her husband Ezra remained unaware of this.  While still in university Grace met and fell in love with Torin. He felt he was too old for her, and left the country for work. Meanwhile, she met Ezra. Ezra subconsciously reminds her of Torin, but she comes to love him for himself. They marry and only then does she realize that she has indeed married Torin’s younger brother.

Meanwhile, on Redferne Lane, it is not only Grace who is struggling.  At the big house, Redferne House, live Noah and Josie Redferne.  They have two young boys and are expecting another baby. Noah, Ezra’s other brother, is an architect and is not as faithful as he should be to his growing family. Also living at Redferne House is Eliza, Noah’s teenage daughter by a former partner.

Down the lane lives the elderly Ada. She once worked at Redferne House as the housekeeper.  Now she lives alone and is becoming increasingly fragile.  Strangely, Ada is Grace’s only real friend. Grace does Ada’s shopping and visits her regularly.

The next cottage is inhabited by Sam and her teenage son, Jerome. Sam is the present day ‘cleaner’ for Redferne House.

Grace’s downward spiral of behavior is tempered by her involvement with the others who live in the lane.  She feels desperately despondent at the loss of her young husband Ezra. She also feels guilty that she first had feelings for her husband’s brother, Torin.  She has come to despise herself and her role in the family dynamic.  She dislikes her present job. She drinks and smokes to excess. Sometimes her drinking is combined with her anti-anxiety medication, to ill effect. She sometimes suffers from blackouts and memory loss. Both her personal appearance and the state of her house reflect her apathy.

The book is written in a clever way. Grace and her present life moving forward – and a second narrative featuring Grace when she was married to Ezra moving back in time.

There are many things I loved about this novel. The setting for one. The family for another. The Redfernes and the other inhabitants of Redferne Lane were very real characters that you come to care for whilst reading this book. I liked how every age group was included, from the very young to the very old. The love story was believable and well rendered. The depiction of the effects of grief on a person was well written.

There were also a few negatives. Grace’s over indulgence on pharmaceuticals and alcohol was a bit repetitive at times. I lost track of how many times she was hungover or had vomited in front of other people due to her excesses.

Also, I found many small errors in this novel that somewhat marred my reading experience.  Words were omitted from sentences making me stop and read them again to gain clarity.  For example: “Where are going when you leave Redferne Lane?“; “Are you going move here?” I know this is not the author’s fault, but it impacted my reading experience nonetheless.  Other readers might not notice these things, but I have always been a stickler for detail and the overall ‘flow’ of a book.

I’m not a great fan of romance fiction, however I think “Redferne Lane” is not exactly romance. I would classify it as literary women’s fiction with an integral love story.  I very much enjoyed this debut novel and will gladly read any future books by this talented novelist. Recommended.

I was provided with a complimentary digital copy of this novel directly from Thistle Publishing. This in no way influenced my rating or review of this book.

Sarah Scholefield initially trained as molecular biologist gaining a BSc (Hons) in Biology from The University of the West of England. After realising she wasn’t cut out for life in a laboratory she worked in numerous schools across the West Country. She has always enjoyed making up stories in her head and finally began to write them down. In 2014 she gained an MA in Creative Writing from Bath Spa University. Redferne Lane is her first novel. She lives in Somerset with her husband and children.