Renee at It’s Book Talk began this meme as a way to share old favorites.
This week I’ve chosen “Playing with fire” by Tess Gerritsen for my Throwback Thursday post. It was first published in October 2015 by Ballantine Books and was, for me, a 5 star read.

Many readers are familiar with Tess Gerritsen for her immensely popular Rizzoli and Isles mystery series.  In “Playing with fire“, she has written a riveting, partly historical stand-alone novel that kept me spellbound throughout!

When I say partly historical I mean that there are dual narratives.  The novel tells the story of two violinists, Julia Ansdell in the present day – and Lorenzo Todesco during World War II.

The novel captured my full and undivided attention with the first sentence and never let go.

While traveling in Rome, Julia visits an antiques shop where she purchases a book of gypsy music.  Within the pages of this book is a handwritten sheet of music with the title “Incendio“.  Upon returning home to Massachusetts, Julia plays the music whilst her daughter plays nearby.

Her daughter’s screams divert her attention.  Her beloved cat is bloodied and dead.  Did her sweet three-year old daughter kill the cat when her attention was on her music?  The second time Julia plays ‘Incendio” she suffers from a nasty gash to the leg with a piece of glass.  Could it be that the music somehow influences her daughter to become violent?  Julia finds herself afraid of her own sweet baby daughter.   Her husband and aunt think that perhaps she herself is delusional.   Julia’s mother was mentally ill.  Perhaps she has passed it on to Julia….

Fearful of what her life has turned into, Julia travels once more to Venice.  She wants to trace the origins of the music hoping that by learning its history she will in some way come to understand recent events.  When she arrives in Venice, danger lurks around every corner.  She is on the run with no one she can trust… 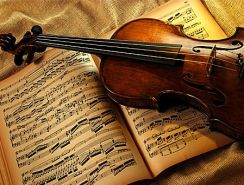 Lorenzo’s story was both profound and disturbing.  Born to a Jewish family of luthiers and musicians, he is an accomplished violinist living in Cannaregio, Venice.  His grandfather has passed on his precious violin to Lorenzo and it is with this instrument that he intends to enter a musical competition as part of a duo.  His partner, a cellist, is a Catholic girl named Laura.  Laura and Lorenzo fall deeply in love.  When the grand night of the competition arrives their lives are forever changed.

On November 14, 1943  the Carta di Verona (Article 7) declared that henceforth all Jews would be considered enemy aliens of Mussolini’s government (Italian Social Republic).  In a few short months over 3500 Jews were arrested in Italy.  Lorenzo and his family were arrested by the Black Brigades and detained, then sent to work camps.  Singled out because of his violin and musical ability, Lorenzo was spared.  If you could call it that.  His fate at Risiera di San Sabba was unimaginably brutal and would be unendurable for most.

The best that fiction can offer is characters that will remain with you long after the last page is read.  This is such a novel.   Tess Gerritsen has written a story that pays homage to the importance of music, to the ultimate sacrifice of countless innocent Jews, and to the powerful capacity of the human spirit.

I have read many books about antisemitism and the atrocities perpetrated against the Jewish people during World War II.  However, I didn’t know much about the part that Italy played in these atrocities.  After reading this book my eyes were opened…  I love it when you can educate yourself by reading fiction!

With elements of historical fiction, thriller, and love story, “Playing with fire” should appeal to a very broad audience.

Tess Gerritsen composed a musical score to accompany the novel.  Visit her blog to hear a short sample of “Incendio” which is available for purchase.

Sincere gratitude to Ballantine Books via NetGalley for providing me with the novel in digital format for review.

If you want to read further about Italy’s role in the Holocaust:  http://www.holocaustresearchproject.org/nazioccupation/italianjews.html       and

Read an online interview with Tess Gerritsen where she discusses “Playing with fire”.