First we meet Kate Matthews.  In her early twenties she has moved from her home in the suburbs of Bristol to take her chances in the big city of London.  She has settled in the London community of Brixton where she shares a house with four other people who she barely knows.  She has been here for two years now and is very lonely and depressed.  Also, lately she has been experiencing panic attacks.  She works as a journalist for a small community newspaper, The Brixton Chronicle. When she is not at work, she is usually in her bed.

“Stories were Kate’s friends when she found people challenging. She searched them out, hiding among them in the library and tucking herself into their pages.”

Next we meet Rosemary Peterson.  In her late eighties, she also lives alone.  She has been a widow for the past two years. Her late husband, George, was the love of her life and her reason for living. Across the street from Rosemary’s flat is the Brixton Lido.  The Lido has always been a huge part of Rosemary’s life.  She swims there every day and has since she was a young child.  She and George shared many loving memories there.  She has gone there during the war, during the London riots, and countless other occasions.

“Rosemary is eighty-six but in the water she is ageless.”

We learn of Rosemary and George’s story.  They met the day that WWII ended. Their story will make you laugh, and make you weep.

Now, Rosemary’s beloved Lido, which has been in existence since 1937 is under threat of closure.  It seems a large property company want to buy the real estate it sits upon to build a gym and tennis courts for their tenants.

Back to Kate.  Used to trivial jobs of reporting on lost pets etc., she finally is given a story with some substance.  She is to research the story of the Lido, before it becomes a Brixton memory. She goes there to find out more about the potential closure of the outdoor pool. She is directed to interview Rosemary, who knows more about the Lido than anyone else.

Rosemary agrees to the interview – but ONLY if Kate swims in the pool.  Kate does, and following her interview with Rosemary, the two become loyal friends.  Daily swimming in the lido helps Kate with her anxiety.  She becomes invested in the plight of the pool and begins to help Rosemary ‘save’ her lido.

“Hope is the most painful thing.”

Along the way, the reader becomes immersed in the community of Brixton.  The myriad cultures represented in its population.  Even the wildlife get a few mentions. We meet Rosemary’s many friends. The gay couple who run the local bookshop.  The man who sells her produce, a teenage boy who swims at the lido, a new mother who brings her baby to the pool. ..

This book reminded me a lot of the works of Fredrik Backman.  Libby Page has captured his method of using spare sentences that evoke emotion and deep understanding.  Like Backman, her characters become friends with the reader – to the point where you miss them when the last page is turned.  It also reminded me a bit of last year’s “Lillian Boxfish takes a walk“, only in my opinion it was much better.  Instead of paying homage to New York, as in Lillian’s story, it pays homage to Brixton, London.

This is a novel of loneliness, friendship, aging, love, and loss. The writing flows as effortlessly as water in a pool. The descriptions are vivid – so vivid that you can almost smell the chlorine and taste the character’s salty tears.

“The Lido”  is a remarkable debut novel that I highly recommend.  A joy to read!

I received a digital copy of “The Lido” from Simon & Schuster via NetGalley and I provided this unbiased review voluntarily. 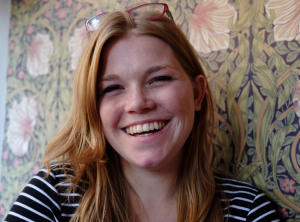 Libby Page is the debut author of The Lido, published in the UK by Orion and by Simon and Schuster in North America. Rights to The Lido have been sold in over 20 other territories around the world.

Before writing The Lido Libby worked as a campaigner for fairer internships, a journalist at the Guardian and a Brand Executive at a retailer and then a charity.

You can find her on Twitter at @libbypagewrites. She also shares her swimming adventures with her sister Alex at @theswimmingsisters.

17 Responses to “The Lido” by Libby Page – Book Review