“The sewing machine has provided work in manufacture, eased work in the home and facilitated work when there was none to be had.” 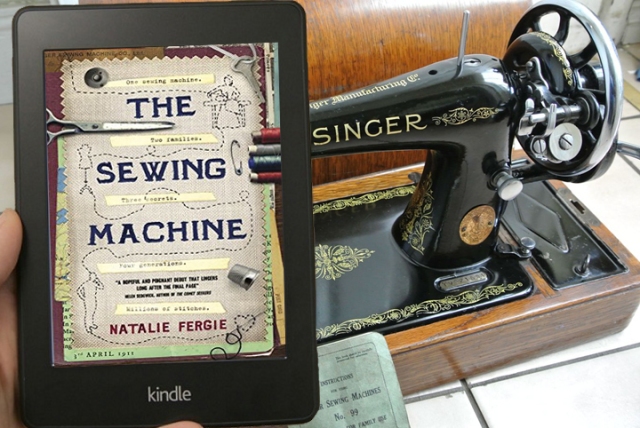 A well researched historical novel that alternates between several timelines. 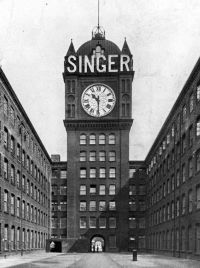 1911 Clydebank, Scotland where we meet an eighteen year old Jean who works as a sewing machine tester at the Singer Factory. At that time, the Singer Factory was all powerful and employed thousands of workers.  It even had its own railway station and its own trains. Jean lives with her domineering father who also works for Singer.  There follows a brief and accurate portrayal of the strike that took place that year. A strike which Jean’s father disapproves and which Jean’s beau, Donald Cameron, helps organize.  The betrothed Jean and Donald eventually are forced to leave Clydebank and they move to Edinburgh. 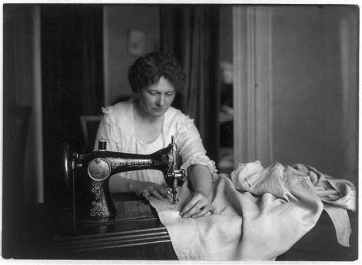 1954 Edinburgh, Scotland where we meet 33 year-old Connie Baxter. She lives with her mother Kathleen, a tailor. The two women get along very well. Kathleen works on an old Singer machine. For every sewing task she completes, she writes the details in a notebook.  After a family tragedy, Connie, a typist, finds a new job as a seamstress for a hospital. This position will be instrumental in her meeting a young woman named Ruth Watkins, and her future husband, Alf Morrison.

1980 Edinburgh, Scotland where we meet Ruth Watkins.  Single and pregnant, she is trying to finish her nursing practicum before the Old Royal Infirmary realizes her condition.  She approaches a woman named Connie who works at the hospital to see if see can let out her uniforms so that they will not be so tight and camouflage her pregnancy.

2016 Edinburgh, Scotland where we meet 35 year-old Fred.  Newly single and unemployed, Fred inherits a flat (and a cat named Crabbie) from his grandfather Alfred.  A flat that has been in the family since 1890. Fred writes a private blog which he uses as a sort of diary/confidante. Fred is a very private man. He begins the herculean task of clearing out the flat, only to find himself keeping most of what he discovers. There are Marmite jars everywhere – used for keeping pens, plant cuttings, and various other things. The most important find though, is an ancient Singer sewing machine.  Within the machine he finds numerous old notebooks that tell the tale of his family history, one stitch at a time…

Surprising himself, Fred begins to use the old machine.  He finds that sewing helps him to decompress, freeing his mind of his stresses and his loneliness.  When the machine needs servicing, he meets an artistic young woman whose life is intrinsically tied to his.

Natalie Fergie brings the past eloquently to life. All of her characters are well fleshed out so that the reader is invested in their plight.  The narrative reminds us of a time when frugality was the norm – quite the opposite of our current disposable society. She skillfully stitches all of her characters and timelines into one cohesive whole – while at the same time describing how both tangible and intangible things are passed down through generations.

A novel of what family means, of love, loss, of hardship, and of letters lost and received. A great read that I highly recommend to lovers of literary, historical fiction, and of course…. family secrets. An emotional and evocative debut.

I received a complimentary digital copy of this novel from Unbound Digital via NetGalley in exchange for my unbiased review.

There is a film of the National Library of Scotland website, entitled Birth of a Sewing Machine, that you might find of interest.

Natalie Fergie lives near Edinburgh, Scotland.
Her debut novel, The Sewing Machine, was published in April 2017 and is set in Clydebank and in Edinburgh. You can walk to many of the real life Edinburgh locations in the book, browse the shelves in the library the characters visited, and stand in the grounds of the Royal Infirmary looking up at the windows, as they did.

Natalie writes mostly from home, in a room overlooking the Forth Valley, with the Ochil Hills in the distance. When she isn’t writing, she is plotting her next book while she makes soup, or walks the family labrador.

14 Responses to “The sewing machine” by Natalie Fergie – Book Review