Posted on October 1, 2018 by Fictionophile

October 1st and back home again!

To celebrate our 41st wedding anniversary, my husband and I went on our first ever cruise!  We flew from Halifax, Nova Scotia to Vancouver, British Columbia (4,444 km= 2,761 miles) where we boarded the Holland America Westerdam cruise ship. Then we sailed to ALASKA!

September was a very busy month for us.  Besides preparing for our trip, we redecorated the kitchen and bathroom at our little summer cottage.  Painting walls, replacing floors, etc.  The upshot of which is I got very little reading done.  The good news is I also didn’t add many new titles to my already packed TBR.

During the month of September I added only THREE titles to my TBR.

I downloaded 3 titles from NetGalley in September:

“She Lies in Wait” by Gytha Lodge

On a hot July night in 1983, six school friends go camping in the forest. Bright and brilliant, they are destined for great things, and young Aurora Jackson is dazzled to be allowed to tag along.

Thirty years later, a body is discovered. DCI Sheens is called to the scene, but he already knows what’s waiting for him: Aurora Jackson, found at long last. And that’s not all. The friends have all maintained their innocence, but the body is found in a hideaway only the six of them knew about.

It seems the killer has always lurked very close to home…

I received this book from Random House via NetGalley 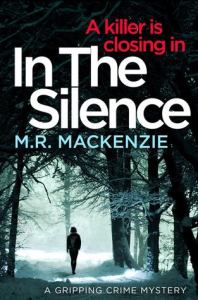 “In the Silence” by M.R. MacKenzie

Anna, a criminology lecturer, returns to Glasgow from Rome during the coldest winter in memory. While out with her best friend from school, Anna has a chance encounter with a former flame, Andrew. Tragedy strikes later that night when Anna discovers Andrew stabbed and dying on a blanket of snow.

Soon Anna finds herself at the centre of the investigation as the star witness for the police, and embarks on investigating the case herself. But Anna doesn’t realise the danger she is in and soon finds herself in trouble.

When another body shows up, who has links to the first victim, it appears that the motive may lie buried in the past.

As Anna gets closer to the truth, the killer starts closing in.

But can she solve the gruesome mystery before the killer strikes again?

I received this book from Bloodhound Books via NetGalley. 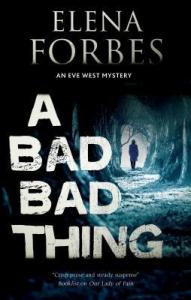 A highly effective police officer, albeit one who keeps her past carefully hidden, Eve West is suspended from duty after a police operation goes catastrophically wrong. Receiving help from an unexpected quarter – a criminal she put away many years before – Eve feels she has no choice but to agree to his request to investigate a possible miscarriage of justice in return. But why is a hardened criminal like John Duran so keen to help a fellow-inmate convicted of the murder of a stable-girl? And why has he chosen Eve to look into the case?

Teaming up with crusading journalist Dan Cooper, Eve begins to uncover disturbing flaws in the original investigation. But as her past is dragged to the surface, she comes to realize she has been plunged into a case more complex and sinister than she ever imagined…

I received this book from Severn House via NetGalley

I didn’t purchase any titles in September.  That HAS to be a first!

I’m delighted to report that there are now 2.927 people following this blog!

My Goodreads Challenge is doing okay

My Edelweiss feedback ratio is dismal…

Fiction reviewer ; Goodreads librarian. Retired library cataloger - more time to read! Loves books, gardening, and red wine. I have been a reviewer member of NetGalley since October 2013. I review titles offered by Edelweiss, and participate in blog tours with TLC Book Tours.
View all posts by Fictionophile →
This entry was posted in Fictionophile report and tagged book haul, This blog. Bookmark the permalink.