“It had started with such promise and ended in tragedy, suspicion, and a police investigation. Horrible.”

Five young women, former college roommates, are the stars in this novel. The best of friends, they visit a country inn annually.  Until… the unthinkable happens and one of them is gravely injured.  Evangeline Paul survived her fall from the fifth floor balcony, but was paralyzed as a result.  Now, the women seldom keep in touch. The tragedy put them all under suspicion by the police and has put an indelible blight on their friendship.

The story, for the most part is told through the eyes of Laurel Muir.  She is divorced, and a successful lawyer. Recently she has been appointed as a judge. In her late thirties, she longs for a child and a life beyond that which her career provides.  Ten years have passed since she and her former college friends visited “Chateau du Cygne Noir“.  Now, surprisingly, she receives an invitation to once again visit the inn in North Carolina along with her four friends during the first weekend of September.

Besides Laurel, the other women include Dawn Infanti (a gay artist), Ellie Ordahl (a married mother of college age sons), and Geneva Prost (a pregnant African American television reporter from Chicago). 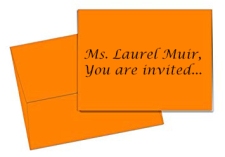 The women have all received the trademark tangerine envelope with held an invitation to the inn.  And, despite the decade that has passed since they last visited, they all accept Evangeline’s invitation. They find that the inn has recently been sold and is to be turned into a nursing home. The caretakers, Mr. and Mrs. Abbott, have been let go and this is their final guest booking before they leave the inn permanently.  It really is “the last weekend“.

Now in a wheelchair, Evangeline seems to have turned her life around. She says that a miracle cure from Mexico has enabled her to perhaps walk again. She is engaged to be married and wanted to share her happiness with her old friends.

“Strange, that, how “lasts” could happen without any fanfare or notice; they could be over and one with before you noticed their significance.”

Another tragedy mars their reunion. This time Evangeline is dead. The women are all under suspicion. Sheriff Judah Boone is leading the investigation.  The women all have motives, but “all of their motives were dusty with age”.  Laurel takes it upon herself to aid in the investigation.  Before their stay ends, many of her friends will be put in dire peril.

This is a classic ‘whodunit’ mystery.  A closed setting with limited suspects. Many motives to cast suspicion on them all.  The setting was atmospheric and the characters quite engaging.

Perhaps I’ve just read too many similar novels, because though I find it difficult to pinpoint just what left me less than enthusiastic, it was for me just a ‘mediocre‘ read. I think this has a lot to do with the fact that I cottoned on quite early just who the guilty party was – though to be fair, the author did include a plot twist near the end that I did not anticipate.

I think this book will be enjoyed by many who like a suspenseful mystery with a dash of romantic suspense.

Many thanks to Midnight Ink who supplied me with a digital copy of this novel via NetGalley.

Laura DiSilverio is a retired United States Air Force intelligence officer. She is married with two children. She is the national bestselling and award-winning author of 21 mystery, suspense, and young adult dystopian novels. Her 2015 standalone, The Reckoning Stones, won the Colorado Book Award for Mystery, and Library Journal named her recent title, Close Call, one of the Top Five mysteries of 2016.

14 Responses to “That Last Weekend” by Laura DiSilverio – Book Review