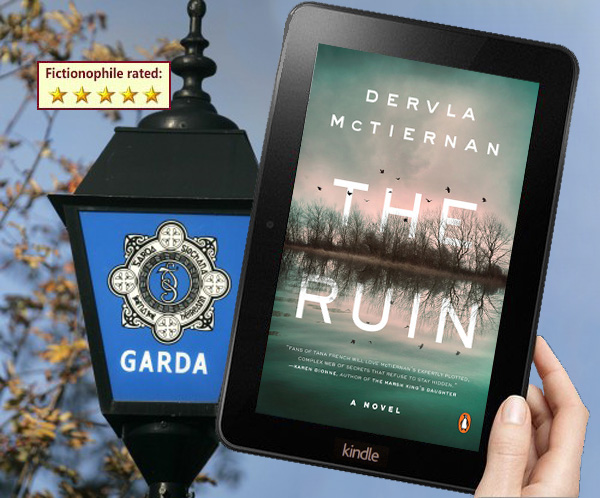 “In Irish, Rúin means something hidden, a mystery, or a secret, but the word also has a long history as a term of endearment.”

From the publisher’s blurb: “This unsettling small-town noir draws us deep into the dark heart of Ireland, where corruption, desperation, and crime run rife. A gritty look at trust and betrayal where the written law isn’t the only one, The Ruin asks who will protect you when the authorities can’t—or won’t.”

The story begins in Mayo, Ireland in 1993. Garda Cormac Reilly has only been on the force for about a month. One of his very first cases involves the death by overdose of a young mother. He finds the woman’s body in a decrepit house with her two young children – Fifteen year old Maude and her little five year old brother, Jack. The children had clearly been badly neglected. The house was freezing and the children appeared abused.  As this was one of his first cases, it is one that he has never quite forgotten. He remembers taking the children to hospital where young Jack was treated, and where Maude ran away, never to be heard from again… 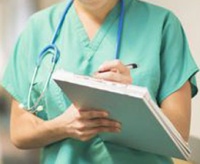 Galway, 2013 – Skip ahead twenty years and we meet a young doctor who is working toward becoming a surgeon. Aisling is dedicated in her work and very happy in her personal life. She is married to a great young man named Jack Blake. Yes, that same Jack who Cormac found all those years previous.

Cormac, has had a stellar twenty year career with the Garda, but has recently moved from Dublin to Galway.  He is now in a committed relationship with Emma who moved to Dublin for work. He followed her. Now, instead of working high profile cases, he is ostracized and put in charge of cold cases.  The only friend he has in the office is Danny who was his second in command in Dublin and whom he brought with him. Danny no longer reports to Cormac in the new scheme of things.

Aisling has just discovered she is pregnant which shocks both her and Jack. They are not ready to become parents. Jack goes out to let Aisling sleep after a long shift. He never comes home… His body is found – a suspected suicide.

Martha has recently returned to Ireland after living in Australia for the past twenty years. When she learns of her brother’s death, she is devastated. She is convinced that Jack did not commit suicide and tries valiantly to convince the police of her conviction. 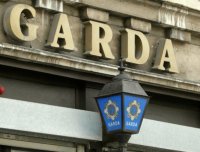 Cormac is tasked with re-examining the death of Hilaria Blake twenty years ago. Meanwhile the other Garda from his office refuse to investigate further the recent death of Jack Blake.

Maude tries to convince Aisling that her beloved Jack was murdered… Cormac wonders where the truth lies.

Cormac Reilly is a tall, thoughtful, honorable, policeman. The fact that this is a debut novel astounds me. The writing is polished, the characters well developed and sympathetic. The plot is very believable and structured in a way that the reader compulsively turns the pages to find out the truth. And what a plot !!! Mixing a cold case with a current case is nothing new, yet this author has created a story that rings true and convinces the reader of its veracity.

Yes folks, I hope Cormac Reilly has a long, varied, and distinguished career with the Galway Guarda. I will be following his career closely and I have already pre-ordered the second novel in this new series (The Scholar). If you like impressive debuts with an outstanding police procedural mystery, then perhaps you should too.

I received a digital copy of this novel from Penguin Books via Edelweiss for purposes of this review.

In case you are interested, I’ve included the UK version of the novel’s cover. 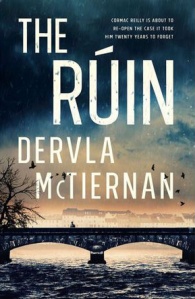 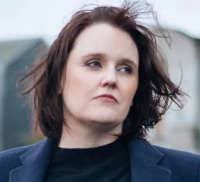 Internationally bestselling and critically acclaimed writer, Dervla McTiernan is the author of The Ruin, her crime debut set in Ireland. The Ruin is the first in the detective Cormac Reilly series and has been published in the United States, the UK and Ireland, and in New Zealand and Australia, where it was a top ten bestseller. It has been named one of Lit Hub’s Most Anticipated Crime Mystery and Thrillers of 2018 and an Amazon Best Book of July 2018 and has been optioned for TV by Hopscotch.

A lawyer, and now a leading crime writer, Dervla was born in Ireland and now lives in Perth, Australia with her husband, two young children, and a golden retriever.

8 Responses to “The Rúin” by Dervla McTiernan – Book Review