“Go to my Grave” by Catriona McPherson – Book Review

Posted on November 11, 2018 by Fictionophile

Present Day: The story begins with the protagonist, Donna Weaver. She is hosting a family reunion weekend for eight people. Donna and her mother own and run “The Breakers” a refurbished guest house near the sea in Galloway.  Her mother is attending a trade fair, so Donna is left to host, cook, and clean for the event on her own.  She enjoys her job and takes the sudden turn of events as a challenge that she has every confidence of meeting.

She has a few qualms however when she meets the guests. They are an odd lot. Siblings and cousins, with spouses, they bicker and insult each other constantly.  They quickly realize that they have been in this house before… twenty-five years before… Despite their dire memories of the place, they are somewhat charmed by Donna’s efforts, the great food and drink, and the ambiance of the guest house which comes complete with wild black rabbits on the lawn and its own private beach.

The ensemble agree to surrender their ‘devices’ (laptops, phones, etc.) to Donna for the weekend in order that they can ‘chill’ and enjoy the family weekend. Things turn mysterious when several pranks develop.  No one will take responsibility for the pranks, which turn nastier and nastier, and which are upsetting to some of the guests more than others.  Donna realizes that perhaps they aren’t so antagonistic as they are afraid…

The ‘pranks’ turn deadly serious. Donna fears that her business is doomed from the first round of guests.

1991: “The Breakers” went by a different name back then. We meet two young local girls whose mother cleans for the guest house.  A rich family have rented it and are hosting a birthday party for their sixteen year old son. The two girls, Carmen (age 14) and Lyndsay (age 12) are invited to even out the numbers for the party. When they arrive they realize that the parents have gone off and left the teenagers to party unsupervised. As is predictable, they soon get out of control – then tragedy and trauma result…

Ever since reading “The day she died“, I have been a huge fan of Catriona McPherson. I’ve enjoyed all of her books, though none quite so much as that one.

The first half of this novel was a bit of a slog for me, but the second half more than made up for it.  I really enjoyed the ‘country guest house’ setting. Scotland beside the sea – what more could you ask for really?  I also enjoyed the tried and tested idea of the closed circle of suspects and the way that the protagonist put up with all their griping. I learned a lot about the hospitality industry, and admire anyone who chooses that as a career.  I really enjoyed the dual timeline in this case, though I suspected how they would be linked, and I was partly correct. The ending was not quite as cohesive as I would have hoped for, but that is just me. A novel of crimes kept secret, childhood trauma, and sweet revenge. Overall I would recommend this title to all who like a good mystery.

I received a complimentary digital copy of this title from Minotaur Books/St. Martin’s Press via NetGalley in consideration of a review. 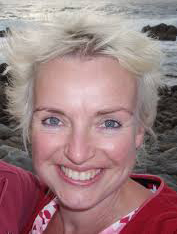 Catriona McPherson was born in Edinburgh, Scotland, and is the author of the Dandy Gilver historical mystery series, which was nominated for a Macavity Award in 2012.   She moved to California in 2010 but she returns to Scotland every year for a wee visit to quell her homesickness.

She is now a full time writer.  When not writing, she is reading, gardening, cooking, baking, cycling , and running.