BLURB: Two murders. Twenty years. Now the killer is back for more… DCI Matilda Darke has returned to work after a nine month absence. A shadow of her former self, she is tasked with re-opening a cold case: the terrifyingly brutal murders of Miranda and Stefan Harkness. The only witness was their eleven-year-old son, Jonathan, who was too deeply traumatized to speak a word. Then a dead body is discovered, and the investigation leads back to Matilda’s case. Suddenly the past and present converge, and it seems a killer may have come back for more…

In November I wrote a post asking YOU which of five British police procedural mystery series I should begin reading first. The stand-out winner of this poll was the DCI Matilda Darke series written by Michael Wood.  All I can say is THANK-YOU, THANK-YOU, THANK-YOU!

We catch up with DCI Matilda Darke on her first day back at work after a long absence. She has suffered a grievous loss and is struggling to get through her day without a panic attack. Since her therapist does not allow her to work full days, she finds herself working reduced hours and not back in her former position of DCI. Her nemesis, Ben Hales, has been the acting DCI of the Murder Investigation Team in her absence and continues to fill that role until she is deemed fit to return to her normal working hours.

Matilda, age 41, is worried that she will not be up to the tasks she is assigned. She is depressed, she is drinking too much, and she has a serious lack of confidence.

She is tasked with an unsolved, cold case – the Harkness killings. Twenty years previously a husband and wife were brutally slain in their home. The parents of two sons, they were found stabbed with only their young, eleven-year-old son Jonathan as witness. And he is not much of a witness as the experience rendered him mute for some time after the attack. The older son, Matthew, was not home at the time.  Now, the house where the Harkness murders took place is to be demolished and the case will once again come under scrutiny by the press.

Matilda is paired with a young DC to help her in her investigations. “The door breezed open and in bounded DC Rory Fleming like Tigger on Ecstasy”. Rory is the perfect foil for the older, damaged, Matilda.

“Was her job really so important to her that she was prepared to risk her health? Of course it was; all she had left was her job.”

Jonathan Harkness has moved back to Sheffield. Now thirty-one years old, he works at a large bookshop. When he hears of the prospective demolition of his former home he worries that he will see his older brother Matthew there. They have never gotten on, and he hasn’t seen him for years, nor has he wished to… 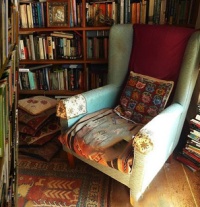 Jonathan seems a tragic figure. His work and his home are filled with books. Reading is his only solace. He eschews technology in any form and doesn’t own a television or a mobile phone. He reads crime fiction in all of his spare time. He has no social life and no friends to speak of, other than a (creepy) neighbour in her sixties named Maun.

Meanwhile, DCI Darke is searching for a possible motive for the Harkness killings. She contacts Jonathan and finds him to be a pitiable, sad, young man with a horrendous childhood history and a defeatist attitude toward life.

Then, the MIT has another murder on their hands. It seems that Jonathan’s brother Matthew has been brutally slain outside a Sheffield club. Could the murderer of his parents struck again???

It has been a while since I’ve been so immersed in a book. I love a well executed police procedural and this one was stellar. The seemingly impossible murder mystery, the damaged protagonists, the workplace rivalry, and the excellent characterization all served to make this a top notch crime novel.

I will definitely be reading ALL of the novels in this series. Highly recommended!

“For Reasons Unknown” is published by Killer Reads, an imprint of HarperCollinsUK

Michael Wood is a freelance journalist and proofreader living in Sheffield. As a journalist he has covered many crime stories throughout Sheffield, gaining first-hand knowledge of police procedure. He also reviews books for CrimeSquad, a website dedicated to crime fiction.  As a huge reader of crime fiction he decided to follow in the footsteps of his favourite authors. I, for one, am glad he did.

20 Responses to “For Reasons Unknown” by Michael Wood – Book Review